What are you gobbling up this Thanksgiving break?

As most of you know, I will read anything. I have been known to wander around the library and pick up any books that start with the letter X, or perhaps everything with a silver cover...whatever calls my name on that particular day. ;)

For this Thanksgiving break, I Googled "turkey" and these were the top 4 fiction matches, thus my reading menu for these 4 days at home: 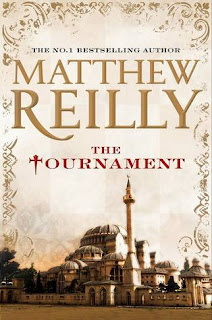 The year is 1546.
Europe lives in fear of the powerful Islamic empire to the East. Under its charismatic Sultan, Suleiman the Magnificent, it is an empire on the rise. It has defeated Christian fleets. It has conquered Christian cities.
Then the Sultan sends out an invitation to every king in Europe: send forth your champion to compete in a tournament unlike any other.
We follow the English delegation, selected by King Henry VIII himself, to the glittering city of Constantinople, where the most amazing tournament ever staged will take place.
But when the stakes are this high, not everyone plays fair, and for our team of plucky English heroes, winning may not be the primary goal. As a series of barbaric murders take place, a more immediate goal might simply be staying alive… 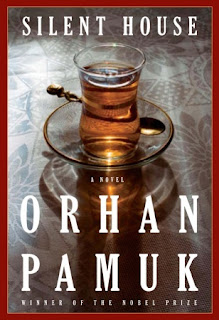 In an old mansion in Cennethisar (formerly a fishing village, now a posh resort near Istanbul) the old widow Fatma awaits the annual summer visit of her grandchildren: Faruk, a dissipated failed historian; his sensitive leftist sister, Nilgun; and the younger grandson, Metin, a high school student drawn to the fast life of the nouveaux riches, who dreams of going to America. The widow has lived in the village for decades, ever since her husband, an idealistic young doctor, first arrived to serve the poor fishermen. Now mostly bedridden, she is attended by her faithful servant Recep, a dwarf--and the doctor's illegitimate son. Mistress and servant share memories, and grievances, of those early years. But it is Recep's cousin Hassan, a high school dropout, and fervent right-wing nationalist, who will draw the visiting family into the growing political cataclysm, in this spell-binding novel depicting Turkey's tumultuous century-long struggle for modernity. 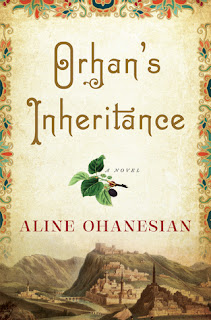 When Orhan’s brilliant and eccentric grandfather Kemal—a man who built a dynasty out of making kilim rugs—is found dead, submerged in a vat of dye, Orhan inherits the decades-old business. But Kemal’s will raises more questions than it answers. He has left the family estate to a stranger thousands of miles away, an aging woman in an Armenian retirement home in Los Angeles. Her existence and secrecy about her past only deepen the mystery of why Orhan’s grandfather willed his home in Turkey to an unknown woman rather than to his own son or grandson.
Left with only Kemal’s ancient sketchbook and intent on righting this injustice, Orhan boards a plane to Los Angeles. There he will not only unearth the story that eighty-seven-year-old Seda so closely guards but discover that Seda’s past now threatens to unravel his future. Her story, if told, has the power to undo the legacy upon which his family has been built.
Moving back and forth in time, between the last years of the Ottoman Empire and the 1990s, Orhan’s Inheritance is a story of passionate love, unspeakable horrors, incredible resilience, and the hidden stories that can haunt a family for generations. 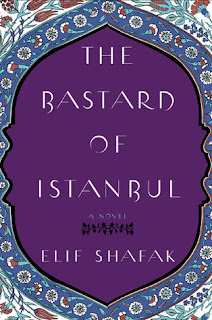 In her second novel written in English, Elif Shafak confronts her country’s violent past in a vivid and colorful tale set in both Turkey and the United States. At its center is the “bastard” of the title, Asya, a nineteen-year-old woman who loves Johnny Cash and the French Existentialists, and the four sisters of the Kazanci family who all live together in an extended household in Istanbul: Zehila, the zestful, headstrong youngest sister who runs a tattoo parlor and is Asya’s mother; Banu, who has newly discovered herself as a clairvoyant; Cevriye, a widowed high school teacher; and Feride, a hypochondriac obsessed with impending disaster. Their one estranged brother lives in Arizona with his wife and her Armenian daughter, Armanoush. When Armanoush secretly flies to Istanbul in search of her identity, she finds the Kazanci sisters and becomes fast friends with Asya. A secret is uncovered that links the two families and ties them to the 1915 Armenian deportations and massacres. Full of vigorous, unforgettable female characters, The Bastard of Istanbul is a bold, powerful tale that will confirm Shafak as a rising star of international fiction.
If you choose to join me in gobbling up one (or more!) of these reads, please leave your review in the comments. :)
Posted by Shelley Workinger at 11:27 AM No comments: 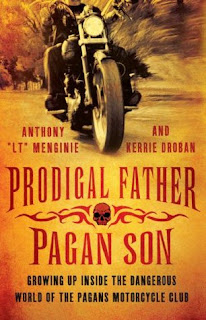 Prodigal Father, Pagan Son: Growing up in the Dangerous World of the Pagans Motorcycle Club, by Kerrie Droban, is a two-time winner of the USA News National Book Award for Best Memoir/Autobiography and Best True Crime. Set in the working class neighborhood of Upper Darby, Philadelphia, one block south of Linden Avenue, Anthony’s life was ruled by the Pagans Motorcycle Club, a group once closely associated with La Cosa Nostra and described in the media as “the fiercest of the outlaw biker gangs.”

As the son of the Pagan’s most notorious power broker, Anthony was born into the shocking and hypnotic underworld of organized crime and, after his father betrayed the Pagans to join its rival, the Hells Angels, Anthony was recruited by his father’s nemesis to murder him.  While navigating the violent inner workings of the Club and his own survival, Anthony took time to cool off with some simple Philadelphia staples like “Water ice” (pronounced “wooder ice”), the city’s version of Italian Ice, and “Little Debbie’s” “Nutty Buddy Bars.” Other guilty pleasures included Entenmanns pastries and multi-layered ‘Moon Pies” with the fluffy marshmallow centers. Juicy cheesesteak sandwiches smothered with Cheese Whiz on a crusty roll were also regulars in Anthony’s diet in addition to meat packed hoagies, fried bologna sandwiches, peanut butter and jelly and soft, salty pretzels dipped in mustard from the local street vendor. But more commonly, as he met with club members, he shared camaraderie over large “tomato pies” made with thick, focaccia-like dough, fresh tomato sauce and grated Parmesan or oregano.

Philadelphia’s traditional food classics were the perfect palate cleanser to the graphic violence depicted in Prodigal Father, Pagan Son effectively transporting the reader into Anthony’s brutal reality. More of Philadelphia’s underworld and Kerrie Droban’s reporting can be seen in the series, Homicide City, on Investigation ID, episodes 8 & 10, November 10 and 24 at 9:00PM EST.  For the full, 4-D experience, might want to order a hoagie and stock up on Cheese Whiz.

Thanks for stopping by to share your food for thought, Kerrie!

You can find Kerrie here:
KerrieDroban.com
Twitter @KerrieDroban
Facebook Fan Page
Books on Amazon
Posted by Shelley Workinger at 9:06 AM No comments: 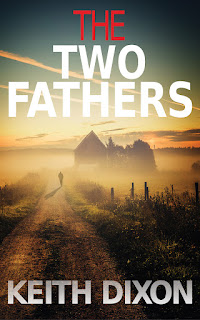 You know what private investigators are like – they’re forever sitting in cars, watching a suspect, eating a burger or a KFC and peeing into a bottle …

Okay, that was probably too much information.

In fact, I’m not sure it’s like that at all these days. Or ever. In fact, the first time I became aware of food in the context of private eye novels was in the Spenser books of Robert B. Parker. Spenser would return from a day’s work being funny with clients and bad guys, reach into the fridge and pull out the exact ingredients needed to make a fascinating and little-known Italian dish. Or an incredible salad with a vinaigrette that he made himself while talking to his dog, Pearl. He was a sophisticated man who was named after an English poet and in fact often quoted poetry himself. I don’t recall him ever peeing in a bottle.

This series began in the 1970s, and when I caught up with Parker’s early novels ten years later, it wasn’t long before I started seeing other writers doing a similar thing with their own protagonists – Robert Crais’ Elvis Cole, for example, would whip up something quickly in his kitchen … and often we wouldn’t know until the end whether he was going to eat it himself or give it to his cat.

These PIs were obviously sophisticated above their station in life, but when I started writing my own series, set around a working class investigator whose clients usually came from the posh end of town, I wanted to include food occasionally (a PI has to eat, after all) together with a singular musical taste, which had been another genre-defining trope that was growing at the time. (Turns out Sam is into alt.country. Who knew?)

So Sam Dyke is a working-class man with the appropriate tastes for a British Private Eye: we see him making chili con carne, buying take-out curries from Indian restaurants and occasionally throwing together a quick spaghetti Bolognese. Writing that down, I realise they’re all foreign dishes, but in the UK we moved away from eating Sunday roasts every day (though I probably would if I could) and in the 70s broadened our tastes. Over the course of the ten full-length novels so far, Sam has experimented occasionally—when he’s dined out with a client or colleague—but the meals that are comfort foods for him are those he knew when he was growing up in the 1990s, although like many of us, if he’s out on a job he’ll buy a burger (another foreign food …) or perhaps a sandwich, which he’ll wash down with a Sprite or 7-Up. In the latest book, The Two Fathers, he eats far too much bread and take-away than is good for his health, but I can’t seem to talk any sense into him.

From the very first book in the series, Altered Life, I’ve had to constantly bear in mind that the characters I’ve dreamed up are actual physical beings with attendant needs. In fact, finding time for them to eat and sleep and bathe is a nuisance when you just want to get on with the story. You try to slide past these needs when possible, but without making your characters seem superhuman. Personally, I can’t seem to last more than two hours without eating something, so I don’t know how Sam does it … maybe that’s why he’s slimmer than I am.

Thanks for stopping by to share your food for thought, Keith! 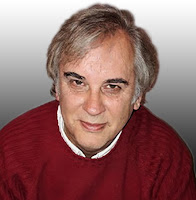 You can find Keith here: