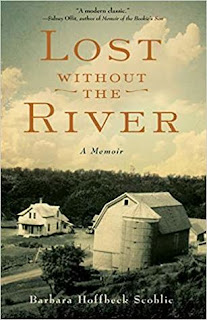 Did you include the recipe for our mother’s Fruit Salad? One brother asks me. Her Baked Pheasant? Another brother chimes in. Her Strawberry Shortcake? That’s my sister.
No, no, and no. Sorry, guys.

Although food is at the heart of my memoir, Lost Without the River, I didn’t want it to be a cookbook. I didn’t want to tell how to prepare the food, but rather how it came to be on our table. Of how my family planted, tilled, and harvested food from the fields, and plucked berries and vegetables from the woods and our garden. With work suspended for a short time, we sat down to dine on freshly picked sweet corn, heavenly whipped cream fluffed from the top of unpasteurized, non-homogenized milk that our grass-fed cows had produced, fish we’d caught in our river only minutes before. We savored each bite, acutely aware of the effort it had taken to get it onto our plates.

Each neighboring farmwife was known for her baking specialty. My mother’s? Her sweet rolls, heavily perfumed with cinnamon and dotted with not-too-sweet frosting,  her pies, with fresh berries or fruit peeking through the crust of the flaky pastry shells, and her angel food cake topped with berries and some of that divine whipped cream.

Now many decades after my mother opened the door of the wood-burning stove for the last time, when my siblings and I gather, at dining table or in a diner, and bread or dessert is served, the spirited conversation stops and immediately shifts to “Remember our mother’s ….”

So when you read Lost Without the River carefully, you may be able to learn how to reproduce my mother’s famous baked beans. At least, as well as I did.

And, if you‘re willing to search for wild plums and locate a wood-burning stove to bake your own bread, and then find cream with the thickness and flavor of ours, you just may be able to make a stone’s throw version of my mother’s famous wild plum cobbler. Good luck!

Thanks for stopping by to share your food for thought, Barbara!

You can find Barbara here:

BARBARA HOFFBECK SCOBLIC began her writing career as a reporter for The Argus Leader in Sioux Falls, South Dakota. She now lives and writes in New York City.
Posted by Shelley Workinger at 6:47 PM 9 comments: 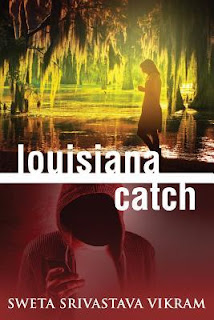 What’s in your multi-cultural plate?

Louisiana Catch traverses through three distinct places—New Delhi, New York, and New Orleans—revealing the foodie nooks and crannies in each city. The female protagonist in Louisiana Catch, Ahana, is a tea-drinking, pinot-noir-sipping health nut from New Delhi who is also a feminist and a foodie. While Ahana’s favorite Indian food is kebabsand chicken biryaniwith raita, a cucumber yogurt salad garnished with crushed mint; she equally enjoys a Cajun spread of shrimp po’boys, andouille gumbo, shrimp étouffée, jambalaya, and the overall Southern hospitality.Ahana hates to cook and is a specific person. She enjoys her green juice and green smoothies and yoga and running just as much as she appreciates a good French pinot.

The male protagonist in the book, Rohan Brady, is from New Orleans who loves everything food. He loves to purchase the ingredients, experiment with recipes in the kitchen, and host dinners. Cooking is Rohan’s way of showing care. On Ahana’s deceased mom’s birthday, Rohan cooks Ahana a Cajun meal in NYC: blackened catfish, red beans and rice with Andouille sausages, corn in a special sauce, and a big salad. He remembers that Ahana’s mother’s favorite dessert was New Orleans style bread pudding with whiskey sauce. And we see him organize that too. Despite being a NOLA boy, Rohan’s favorite dessert is laddoosfrom New Delhi. They are round dessert made with chickpea flour, sugar, ghee, and nuts.

When Ahana meets with Rohan for the first time in New York City, she gifts him a box of laddoos. With a solemn look in his eyes, Rohan bites into one laddoo, This is heaven. Thank you so much. We find out in the book Rohan’s connection to and familiarity with India.

But the most memroable food scene in the book is when Rohan organizes a special treat for Ahana at an upscale, gourmet restaurant, Mom’s Recipes, in Manhattan. The whole evening is sucha nice geusture. Mom’s Recipes has a fixed, international menu, but you can order ahead of time and ask them to cook homely dishes too. Since the owner is from NOLA, Rohan knows him well. At this dinner, there is a bottle of French pinot noir and good Delhi-style food—paneerand almond kebabs, seekh kebabsmade out of chicken mince, butter chicken, naan—leavened Indian bread, saag, and a green salad inside—all of Ahana’s favorites.

Some of these items remind Ahana of food at her mom’s, especially the saagdish made from mustard greens and spices. In Delhi winters, this was a staple at her parents. Her mother, though not the best cook in the world, made the most delicious seekhkebab, Ahana reminisces.

You might find Ahana and Rohan Brady competing with each other over a long run in Central Park or you might find them brainstorming the latest strategy to promote their upcoming conference NO EXCUSE. Whatever be the case, there is also a sighting or mention of food.

Thanks for stopping by to share your food for thought, Sweta!

You can find Sweta here:


Sweta Srivastava Vikram, featured by Asian Fusion as one of the most influential Asians of our time, is a mindset & wellness coach, speaker, and best-selling author of 12 books whose work has appeared in The New York Times, amongst other publications, across nine countries on three continents. She helps C-suite executives, entrepreneurs, and corporations increase profit and productivity through health and wellness. Winner of the Voices of the Year Award, (past recipients have been Chelsea Clinton and founders of the #MeToo movement), in her spare time, Sweta teaches mindfulness and yoga to empower female survivors of trauma. A graduate of Columbia University, she lives in New York City with her husband. 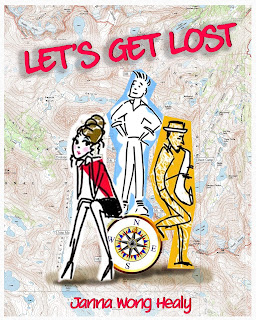 As all residents of Los Angeles know, there is no shortage of good food in our busy urban city.  If you’re a foodie and want four-star dining, it’s available at a high price (along with a hefty valet parking fee).  If you’re a food truck aficionado, there are nights in Venice and daily on campuses across the city where food trucks sit and wait for those who can’t live without their fusion bowls.  If you’re a fast food junkie, just take a drive down any street and you’ll be able to get whatever fat-filled burger you want (including an actual Fatburger!).

So, what does Libby, the heroine in my novel Let’s Get Lost, do in the opening scene?  As a well-paid executive in a finance company, she is taking her three best friends to The Ivy in West Hollywood, one of the toniest places in the city and a popular spot where celebrities eat and interested paparazzi station themselves as they wait for the perfect photograph.

Libby selects this upscale celebrity hangout because she is high on life, loves the restaurant’s Homemade Wild Maine Lobster Ravioli and has the best news to share: after 10 years with Chad, he has finally popped the question!  But, her dreams of walking down the aisle in a specially designed Vera Wang wedding dress are soon shattered when her friends tell her that Chad is having an affair.

To prove them wrong, Libby decides to spy on him.  She sneaks into the mountains where Chad, an outdoor specialist, is leading a tour of elite campers.  But things go horribly wrong for this uber-urban gal and she ends up stranded, only to be discovered by Kit, a jazz-playing saxophonist who has escaped to the mountains to get some much-needed R&R.

Unlike Libby, Kit is well-versed in camping.  As he shepherds her to safety through three days of torturous mountain hikes, spring storms and scary wildlife, Kit introduces Libby to experiences with food that she never wanted or thought she would ever need.  During their adventure on the mountain, Kit shows her the wonders of cooking and eating a fish that she actually catches herself!  He teaches her the difference between edible mushrooms and poisonous ones.  He shows her how to stay alive eating little more than berries.  A woman for whom camping is being in a hotel without internet, she at first hates every moment of Kit’s outdoor education…until she realizes she might actually be in love with him.

Once Libby and Kit are rescued and she learns the happy news that Chad has been faithful all along, can she and Kit forget those three days when they were lost on the mountain together?  Will she forever think of Kit when she buys store-bought blueberries?  Will she ever look at mushrooms the same way again?  More importantly, can Libby and Kit resume their previous lives…or will they realize they need to get lost with each other all over again?

Thanks for stopping by to share your food for thought, Janna! 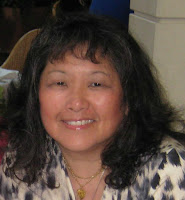 You can find Janna here:

Posted by Shelley Workinger at 3:03 PM No comments: 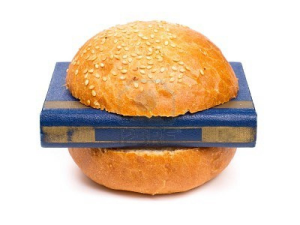 These fabulous authors stopped by to share their food for thought:


And I chewed up:


Since I am so fortunate to have many delightful guests, I don’t get to blog about every book I read. And, to be fair, not every read lends itself to a good FoodFic discussion, either because the food in the story doesn't jump out at me, or my schedule’s already full for the year, or a book’s subject matter is too dark or serious for me to lightly chat about here.

Anyway, below are some (I’m sure I’ve forgotten several) of the books I read over the past year that weren’t reviewed here at BWATE?

Posted by Shelley Workinger at 11:30 AM No comments: