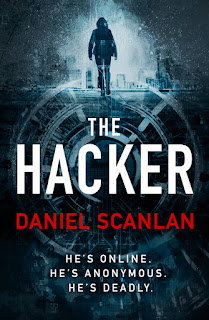 The enjoyment of great food and good company is one of life’s familiar pleasures. Including these kind of scenes in a novel can create the same relaxed enjoyment for the reader as the meals themselves. In a thriller they can be used to create the opposite feeling by stressing the absence of normal opportunities to rest and reenergize, keeping tension high. Pressure is created for the reader by keeping the characters sweaty, stressed and always on the move. In The Hacker, investigators race to find a master cybercriminal using the avatar, Dantalion. Any minute they delay is more opportunity for him to wreak damage. Their compulsion to run him down overrides all other aspects of life.

Eating becomes more of a refueling effort than dining, stopping just long enough to bolt sufficient food to keep going and return to the chase. This, combined with scant sleep for time or anything else places the reader in the head of the investigators and I hope, enables the reader to feel the tension as the characters do. But what are they eating?

Late at night in the lab:

Peering towards the door to ensure she was alone, she stopped to root through Tim’s desk and pirate a pair of granola bars from his bottom drawer. She munched on a bar without tasting it as she settled back into her chair.

Even when they do actually stop to eat, the case is always on their minds:

Tim nodded, waiting to speak as their food arrived. Their mouths watered at the smell of the thick burgers and double-fried chips. After a few huge bites, he leaned back. “I can start working on the material, but there’s an angle to all this we’re going to need to deal with before we go to a judge.

Using deprivation as a mechanism to create tension emphasizes the very few times in the book, when the lead investigator, Ericka Blackwood, slows down enough for introspection, to let herself feel what the chase is doing to her:

They faced each other over the antique table, set with cream, sugar, toast and the old woman’s own marmalade, the comforting scent of breakfast blended with the small, potted flowers near the window. The well of strength that had brought her back while she was suspended. The old woman had moved in below Ericka’s top-floor condo, helping her fill the days and quickly becoming her confidante and counsellor. Mrs. Donnelly’s eyes narrowed as she sipped, the rising sun’s glow on the horizon in the window behind her.

Part of what I hope to bring to the reader in The Hacker is a sense of just how much must be sacrificed in an active police investigation, particularly in the cyber world. I have tried to leverage my three decades as a prosecutor, working with police and seeing the effects their work has on them to bring home to the reader the unyielding stress they deal with in the middle of a big investigation. My hope is that it engages the reader in the chase, making each step they take more compelling as the story unfolds. Food is part of that narrative.

Thanks for stopping by to share your food for thought, Dan! 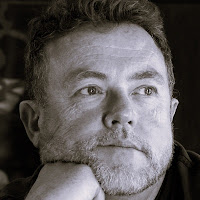 You can find Dan here:

Posted by Shelley Workinger at 6:44 PM No comments: 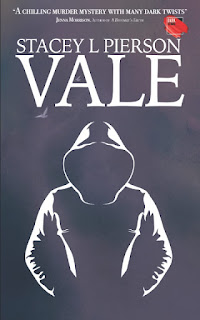 Vale is a Young Adult bayou murder mystery, unique and one of a kind, like a fresh batch of crawfish. And so is the food the characters put into their mouths, and how the food they eat is their personality.

Charles is the plain bagel in the story. He lives with Epilepsy, and with each seizure is like a sprinkling of Everything But The Bagel, which adds another layer to his ever-growing character arc. Layer by layer, bit by bit, Charles add tries new seasonings.

Simple, quick bites represent Leigh. She once was a charcuterie board before she left with different flavors and tasty snacks. Her personality was crunchy like the crackers and crispy like her snappy, sarcastic saying. Now, after her return, she’s silent and missing like the food on the tray.

Truly, I know she is a Trix bar. One of two amazing halves, but once one is gone, you either save it or inhale it, never really tasting the sweetness before it’s too late and leaving you wanting more. But what happens when you break it in half? Do you want to share it? I can tell you that you won’t, especially because of the poison-laced inside.

Max is delicate and darling. He savors each bite with a smile then the heat like jalapeno pepper wrapped in bacon hits. He always goes back for more, even though he’s getting burned, and never reaches for the water to cool off because he enjoys it.

Carmel is exactly what her nickname is. She has always loved caramel apples, but there’s a part of her that chips her razor-sharp teeth on the red glossy, and hard candy surrounding the caramel goodness she sees that no one else does. Like her thoughts, the core of the apple is rotten.

Audrey and the Leeches are the same. Sinister with a twist of flavor like beefy jerky. At first, everything seems great, and they are friendly. But once you take a bite, the peppery taste catches you off guard, and you might choke.

Jace and his football teammates like playing on the field, they are spaced out and ready for one another when it comes to Xs and O’s – like a Valentine’s Day candy you give to your arch enemy as a joke. Funny, but with dire consequences. They look yummy, but the aftertaste is sour and could make you green with envy as their selfishness engulfs you.

Peyton is one who is a mix of sweet and sour. She loves to get in the middle of things but prefers a sour apple Blow pop. She loves to break the hard candy shell down like shredding layers of people’s insecurities and sinking her teeth in the gum inside, like blowing up people’s lives with a smile.

Dark Horse is unique as can be, like black licorice. He’s not everyone’s favorite and not tasty. It’s an acquired taste that comes over time. But it leaves a coating of revenge and truthfulness that most people see as a threat when it’s justice. Horrible, sinister, dark, and deadly justice, you can’t win them all.

Each character in Vale is unlike the other. They look, act, and want to be the same. But they are far from it. One thing that will keep anyone wondering is how many maggots and rot really is inside of them as they bite into their favorite foods.

Thanks for stopping by to share your food for thought, Stacey! 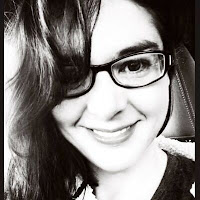 You can find Stacey here:

Posted by Shelley Workinger at 10:00 PM No comments: