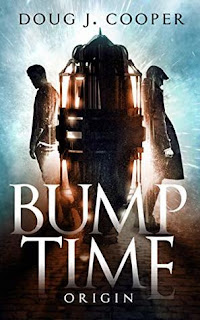 When Shelley asked me if I thought my new scifi time-travel series, Bump Time, would be a good fit in her creative blog, But What Are They Eating?, I laughed. Not because I thought the idea outlandish, but because one of my beta readers teases me about the role food plays in so many scenes in the series. Before I illustrate, here’s the blurb for Bump Time Origin, which explains the premise of the first book:

On his twenty-fifth birthday, Diesel Lagerford is visited by a twenty-six-year-old version of himself. His look-alike spins impossible tales of their shared future, claiming they have dozens of “brothers” from parallel timelines who can visit each other using a T-box, a machine they bankroll with lottery winnings. He introduces Diesel to the incredible Lilah Spencer, the T-box operator, and Diesel falls head-over-heels in love. But during his travels across timelines, Diesel learns that Lilah will soon die under suspicious circumstances. Devastated, he joins his brothers in a race to save her.

Food can provide a natural setting for all manner of activities, especially for someone like Diesel, who loves to eat. While I sometimes include food because it’s appropriate to a scene (it’s noon, so they eat lunch), other times I use it to move the story forward. Below, I show an example. In this scene, Diesel is about to make his first time-travel jump. While he nervously waits for his brother to arrive to show him how, Lilah surprises him with breakfast:

Diesel saw a light come on over on Lilah’s side of the connecting door. Moments later, she stepped through carrying a plate in one hand and a carafe of coffee in the other.

She set the plate in front of him—scrambled eggs, bacon, and toast—fetched the coffee mug from his desk, and poured him a cup of steaming hot brew. She poured one for herself, pulled over a chair, and sat. “Eat before it gets cold.”

Diesel didn’t see any utensils, so he used a piece of bacon to heap eggs onto a slice of toast, and then took a quick bite from the yellow mound before it spilled off. It tasted delicious.

That scene sets the stage. This scene a few pages later, after Diesel has departed, advances the plot:

Stacking the breakfast dishes, Lilah looked around for the utensils, realized she hadn’t brought any, and smiled. He hadn’t complained or even mentioned their absence, showing the easygoing attitude she treasured in her friends and lovers. Taking the last corner of toast off his plate, she popped it in her mouth and chewed slowly while she nurtured the idea of doing something special for his homecoming.

And while the Bump Time series has many scenes involving food, my other scifi saga, The Crystal Series, a futuristic space adventure, also features food, though to a lesser degree. For example, we learn something about Sid, a main character in the space opera, with this simple line:

Sid attacked his food like it was an adversary to be defeated.

So there you have it. Food in the age of time travel and space travel, with more to come!

Thanks for hosting me, Shelley. It’s been great fun.

Thanks for stopping by and sharing your food for thought, Doug!

You can find Doug here:

When he is not writing science fiction novels, Doug is professor emeritus of Chemical & Biomolecular Engineering at the University of Connecticut, and is founder and director of Control Station, Inc., a manufacturing plant optimization company. His passions include telling inventive tales, mentoring driven individuals, and everything sci-tech. He lives in Connecticut with his darling wife and with pictures of his son, who is off somewhere in the world creating adventures of his own.

Posted by Shelley Workinger at 8:57 AM 2 comments:

FOODFIC: Please Welcome Back Carole Bumpus, Author of Searching for Family and Traditions at the French Table 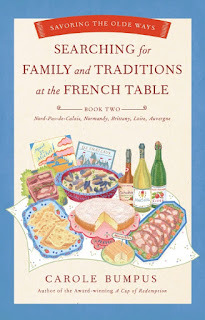 SO, WHAT ARE YOU COOKING?

Timing is everything. And, in my case, timing became a blessing! As I was preparing to test the traditional French recipes for my upcoming culinary travel memoir, Book Two of Searching for Family and Traditions at the French Table, a literal “shut-down,” due to the pandemic, arrived on my doorstep. The ability to go freely about shopping for ingredients at my favorite markets came to a halt, and I was faced with the prospect of an unmet deadline with my publisher. How was I going to get these nineteen recipes tested? No, my book is a memoir and not a cookbook, but I certainly wanted to provide accurate culinary directions to the recipes I provided.

Attempting not to panic, I wrote an SOS in my monthly newsletter, enlisting help from some of my followers, who were also sequestered at home. “Would you like to join me in my virtual test kitchen?” I wrote, not knowing if anyone would respond. But respond, they did. Within less than a week, I heard from over forty-five people, and sent out more than eighty copies of those nineteen traditional French recipes to be tested.

Over the course of the next three months, there was a flurry of activity with masked Instacart and Uber drivers rushing heavily-sought-after ingredients back and forth from store to home. Bartering in grocery lines and trading up and down hallways was known to have taken place. I received notes, edits, and photos of completed recipes from as far away as England, France, and across the width and breadth of the U.S. All, like me, were under quarantine. And all, like me, struggled to find these simple, yet unique ingredients. And all, like me, realized that substitutions can be part of that creative force when it comes to cooking.

As it turns out, traditional French recipes, better known as cuisine pauvre, or peasant dishes, are foods originally prepared from the simplest of ingredients—as long as they are available and seasonal. That is the norm. As this simple correlation dawned on me, I realized this experience was a blessing—it brought a better understanding and resonance to the very themes I hold dear in my culinary travel series: family favorites, traditional in nature.

Within a few short months, all the recipes were tested and retested. Mission accomplished. I was able to compile the edits needed and accumulate photos of many finished dishes of which I featured in my newsletter. And most of all, I was able to add all of my virtual testers names to the Acknowledgement page in the back of my new book. Called Searching for Family and Traditions at the French Table, Book Two, it is due to be published August 18, 2020. Check it out, and bon appetit!

Thanks for stopping by to share more food for thought, Carole!

Posted by Shelley Workinger at 10:26 AM No comments: