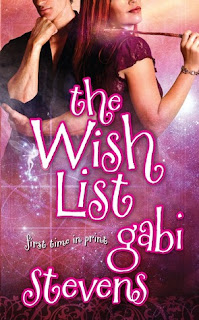 Food doesn’t play a huge role in my book The Wish List, but there is a quirky food item in it. Confession time, because I pulled it out of my own life: My heroine likes to eat Chocolate Chipless Cookies. What are they? As the name says, they’re chocolate chip cookies minus the chocolate chips.

I’m not a huge chocolate fan in real life. I will eat it, but it has to have something in it—nuts, peanut butter, butterfinger filling. No fruit. I will eat brownies, but prefer them with vanilla ice cream on top, no chocolate sauce. I prefer white cake to devil’s food, vanilla pudding to chocolate, and plain glazed doughnuts over chocolate ones. I wish they made eclairs without the chocolate covering the top. Oh, and it has to be milk chocolate. I hate dark chocolate. I think most of my tastes are that of an eight year old. You should see my drink choices.

In writing, it’s always fun to give your characters a quirk. Ron Weasley is afraid of spiders, Yoda speaks backwards, and Sheldon Cooper has too many to list. In The Wish List, I needed to give my character a quirk, something that made her a little more interesting, and I had one ready-made. Chocolate Chipless Cookies.

As I said, not much food in The Wish List, but what there is is special to me. If you want to read a book with more food in it, try the next one in the series, As You Wish. My heroine owns a bakery in that one.


Thanks for stopping by to share your food for thought, Gabi! 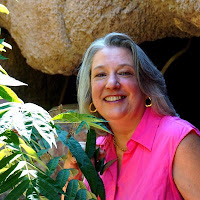 You can find Gabi here:

Books on Amazon
Posted by Shelley Workinger at 1:32 PM No comments: 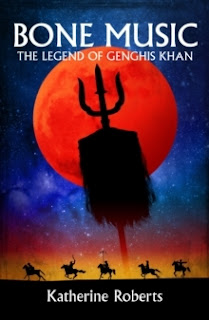 My novel Bone Music tells the story of Genghis Khan’s rise to power in 13th century Mongolia. The book is part legend, but the food and drink in its pages is real enough, and many of the same foodstuffs are still eaten (and drunk) in Mongolia today.

Genghis Khan’s people ate a lot of meat. This would have come both from the herds that travelled with the clans - oxen, horses, camels, yaks, sheep, goats - and also from the wild animals they hunted on the steppes, such as deer, marmots and squirrels.

At the start of the book, the boy Temujin (young Genghis) is living in exile with his family after an ambitious chief stole his dead father's people, and must find a way to feed his little brothers:

I knew we’d be in trouble if we couldn’t hunt for meat. So I struggled to master Father’s huge bow, hidden by the tall pines where the river raged loud enough to hide my grunts of frustration. My arrow-making skills improved (they had to, since I kept breaking the stupid things). But, no matter how hard I tried, I couldn’t draw that string far enough to send my arrows after a deer – or even, most times I’ll admit, hit the trunk of whatever tree I’d chosen that day to take the place of Chief Fatface. – Bone Music, Temujin’s story.

Meat was often dried to preserve it for longer, and when they were on campaign Genghis Khan’s soldiers would keep a strip of dried beef under their saddle to chew on as they rode. But the young Khan's favourite meaty snack must have been the traditional meal of tough mutton he and his sweetheart Borta chewed on their wedding day:

Our wedding turned into the biggest Red Circle feast I’d seen, with buckets of airag for every family and ten whole oxen roasted for the occasion, as well as the tough old sheep whose meat we had to chew in public to show our marriage would be strong. – Bone Music, Temujin’s story.

As well as meat, all the herd animals provided the clans with milk in the spring when they had their young, and some of this milk was turned into yoghurt, cottage cheese, curds, and other produce. This led to the Mongolian summer being known as “the white season”, because that is when the people of the steppes process soft milky foodstuffs to eat after a long winter of increasingly tough, dried meat.

Fruit and vegetables must have been in short supply on the steppe in Genghis Khan’s time, when the clans led a nomadic existence that meant no farming. But the Khan’s people would have foraged for roots and berries when these were in season, and before Temujin learnt to bend his bow, his mother apparently kept her young family alive by feeding them on wild onions.

Medicines were made from various leaves and roots gathered from the forest. The girls were usually sent out to gather these, no doubt a welcome escape from the smoky yurts. When the Khan’s sweetheart Borta rides into the forest with her half-sisters, she thinks they are going foraging, but it is really an excuse for the other girls to ask her to use her shaman powers to find out who they are going to marry:

We packed food for several days and a rolled-up deer hide to make a shelter at night… It was good to be out in the mountains, away from the shaman’s choking smoke for a few days. Remembering our excuse for the outing, I pulled my digging stick out of my pack and began to search for roots, but my half-sisters showed no rush to get started. ‘So!’ Orbei said brightly. ‘What do you learn in the shaman’s tent, then?’ –  Bone Music, Borta’s story.

No meal is complete without something to drink, so what was Genghis Khan’s favourite tipple?
The most common alcoholic drink on the steppe is 'airag', the Mongolian word for fermented mare’s milk. This was made by filtering the milk through a cloth into a leather bucket or wooden vat and stirring it over a period of several days. It is a fizzy, mildly alcoholic drink of about 2% or 3% proof with a varying taste dependant on the method of production, and can be distilled further to make a fierce milky vodka called ‘Arhi’, which is 16% proof or more. The Khan and his men would have enjoyed airag on feast days, although it was apparently responsible for poisoning his father, Yesugei the Brave, who had stopped at a rival camp on his way home from taking young Temujin to meet his future bride and made the mistake of accepting the traditional bowl of airag offered to travellers on the steppe.

Genghis Khan's men also drank their horses' blood when they needed sustenance on a long march - the wound would heal quickly, and then they would ride on. Here, Temujin drinks blood for the first time on his way across the steppe with a friend to rescue his family’s herd of silver-bay geldings, which were stolen by raiders while he was a captive in the fat Chief Kiriltuk’s camp:

We slept rolled in our blankets under the stars, and on the way Boorchu showed me a warrior’s trick for survival when crossing a barren steppe – how to drink my horse’s blood. You make a small hole in the vein at the throat with your knife, and then suck out the blood before the wound heals. The warm, sweet liquid filled my mouth and coated my tongue. I could feel it clotting on the way down, filling me with strength. – Bone Music, Temujin’s story.

Sometimes the blood was mixed with water or milk... so how about a cup of blood mixed with airag to finish your 13th century Mongolian meal?

Thanks for stopping by to share more food for thought, Katherine! 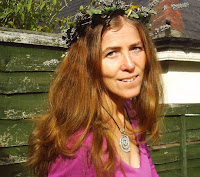 You can find Katherine here:

More about modern day Mongolian food and drink can be found here:
www.toursmongolia.com/mongolian-food-and-drinks

BONE MUSIC: The Legend of Genghis Khan by Katherine Roberts
is published by Greystones Press:
http://www.katherineroberts.co.uk/the-legend-of-genghis-khan

Posted by Shelley Workinger at 12:01 PM No comments: 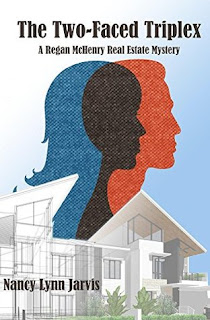 Regan McHenry and her husband, Tom Kiley, will eat anything, and in the Regan McHenry Real Estate Mysteries series, they’ve had a variety of in-home and in-restaurant meals. Regan even cooked an authentic Columbian meal to try and catch a killer in A Neighborly Killing and has been known to burn dinner because a clue occurred to her as she cooked.

In her most recent adventure, The Two-Faced Triplex, Regan explains her plan for getting information about a possible killer out of a reluctant witness to Tom over samosa avocado chat at an Indian restaurant, using her fork to punctuate her thoughts.

Fortunately for Regan and Tom, Santa Cruz, California, where they live and work, is a tourist community and has excellent restaurants that run from upscale French to vegan Mexican with everything in between. And there are as many Thai restaurants in the community as there are Starbucks in most urban settings.

Regan likes to cook and even has an herb garden so exotic ingredients are ready for the picking. Tom is an accomplished griller, especially of beer chicken, but other times when he cooks, it’s frozen pizza for him.

As Realtors, Regan and Tom keep frozen mysterious chocolate chip cookie dough in their freezer ready to be thawed out and baked at open houses to make properties smell “homey.” You can pick up a copy of it at goodreadmysteries.com/recipe.htm.

Thanks for stopping by to share more food for thought, Nancy!