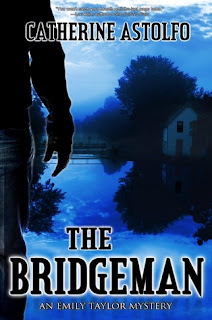 It sounds incredible, but the appearance of food in a novel really can portray personality, plot, setting, culture and emotion. I really like this quote from Gale Encyclopedia of Food & Culture: Food in Literature:


“Because food customs call forth such a labyrinth of associations on the part of individual writers, and because the inherent sensuality of food involves not only the senses of smell and taste, but also the other senses, food is capable of evoking an avalanche of memories and feelings.” *
In my first four novels, which are part of a series, I noticed that my protagonist drinks a lot of red wine.  However, the imbibing is often accompanied by food.


In The Bridgeman, Emily Taylor is introduced as a small-town principal who discovers the body of the caretaker in the basement of her school. Who can blame her for indulging in a stress-relieving lunch?

"Let me tell you our specials to get our minds off all this tragedy." And he [Bill Percival, the Inn’s owner] recited, with something close to passion, the tempting list of dishes that [chef] Theodore Lavalle had created for the day.


Once May and I had chosen—she a creamy pasta dish with shrimp and crab and I a small pepper steak with roasted vegetables—Bill went away and left us sipping our drinks and nibbling on bread. Nick returned to the table right next to us. I tried very hard to ignore the fact that he appeared to be listening over my shoulder.”

In the scene above, I employ the meal as a vehicle to introduce a host of suspects to the plot, as a classic mystery must. The passage also reveals something of May and Emily’s personalities; the latter is always watching her weight, while her friend is far more easy-going.
In Legacy, I used two very different perceptions about food to juxtapose evil and good.


“That evening, the little group partied and celebrated, putting the serious issues behind them for a while, focusing on the positive, the energy, the possibilities and their friendships. Two long tables had been placed from the dining room clear through to the living room. Their faces lit by candlelight, the smiles reflected in the huge picture window.


From the outside, their faces were smudged by the glow of the candles, their mouths opened and closed without sound. The person watching them was incensed by the flagrant display of decadence. The food was drenched in oily sauces, the meat red and dripping, their mouths twisted and churned as they masticated. Sometimes they even laughed, showing lumps of fetid ground-up fodder. Now red faced with a repulsive alcoholic glow, they lifted the glasses of iniquity. They were irreverent, self-indulgent and gluttonous. The watcher’s fists clenched, mouth grimaced in anger.”

Amazing how the simple act of “breaking bread” can lead to such insight into the novel’s plot, characters and setting! 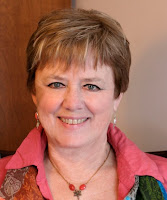 Thanks for stopping by to share
your food for thought, Catherine!


You can find Catherine Astolfo,
all her links, and all of her 5 novels here:

*Read more: http://www.answers.com/topic/food-in-literature#ixzz2e3CM5jD8
Posted by Shelley Workinger at 9:58 AM 4 comments:

FOODFIC: The Year of the Flood - Margaret Atwood 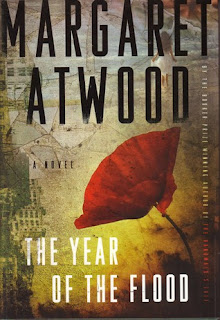 When I open a Margaret Atwood book, I expect certain things: a strong yet tortured female lead, a plausible (though usually not preferable) future, an element of surrealism. And I know I’ll be challenged in my thinking on any- and everything from norms and values to gender roles, power structures, and evolution.

What I don’t expect to spend the afternoon ruminating over is pork.
I’m sure heroine Toby didn’t expect to waste much time worrying over that, either, nor any other meat. Not when she was 12, the world was fine, and her father taught her to shoot and they killed, skinned, and ate deer. Nor after the first phase/wave of disease claimed the lives of the last of her relatives and left college-aged Toby working at a Secret Burger joint to make ends meet.

But that’s where Adam One first came into her life, telling Toby that the light had come to him and told him not to eat anything with a face. When he then asked Toby if she’d eat her own relatives, survival-mode Toby’d immediately retorted, “I would if I was hungry enough.”

Yet, even though there wasn’t insta-like, Toby did eventually decide to follow Adam One and his group of God’s Gardeners back to their rooftop garden – to no longer be a “materialistic, atheistic, meat-eater” and instead choose kinder meals of lentil pancakes and pickled mushroom medley.

Of course, another major wave then floods the planet, wiping out the Gardeners and virtually all other human beings. Toby finds herself completely alone and some pigs cross her path…and it causes her significant moral strife. Adam One’s teachings have become so ingrained in her that she hears his voice telling her animal protein is the absolute last resort, but she’s also so hungry that she has to restrain herself from chasing down the pig with a kitchen knife to saw off a ham.

Such an emotional and intellectual road to walk – staying the moral high ground even when being dragged down by basic instinct. And a much easier line to tow in a time of plenty, rather than one of desperation. You can’t help but put yourself in Toby’s position (multiple times, actually – at each stage of her life) and wonder what you would do. Pretty much the epitome of “food for thought.” ;)

*There was one more thing I didn’t expect from this book: the songs. Because it’s not a few lines or verses, but an entire album’s worth of full-length pieces. I recommend picking up the audiobook version of this one to hear the singer (not the narrator, but another person altogether), guitar and all.
Posted by Shelley Workinger at 7:43 AM 1 comment: 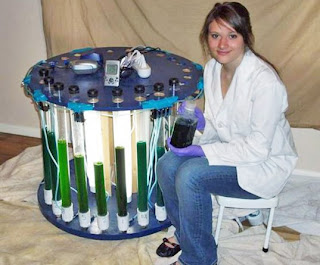 Sara Volz set out to “use guided evolution – so artificial selection – to isolate populations of algae cells with abnormally high oil content.”

Right. So if you, like most people, are not entirely sure what that means, let me put it in basic terms: she started growing algae under her bed to make bio-fuel.

Is it just me, or did saying it more simply actually make her project sound more complicated???

Not only was 17-year-old Sara undaunted by a challenge the green-energy community has been researching for ages, but her fresh perspective may have brought about a game-changer in the field. She found that by using a certain herbicide, she could eliminate the low-oil producing cells in her algae, leaving only “a population cells with very high oil production.”

Good news for science, future Earth, and for Sara herself, who went on to win the Intel Science Talent Search, a competition that’s had SEVEN winners go on to win Nobel prizes.

To see the other entrants’ work or to enter the contest yourself, visit:
http://www.societyforscience.org/STS

Do you know a toast-worthy teen you’d like to see featured here at BWATE?
Comment below with your email address so we can get a post together!
Posted by Shelley Workinger at 4:37 PM No comments: 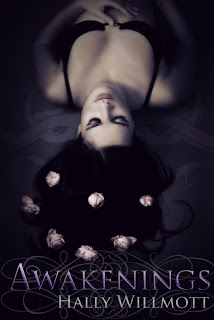 With the debut of my first novel, I have had a number of people ask if the main character Jacey Adison is like me in any way...My original answer to most has been - "She and I are alike only in the first couple of pages - she moved around a lot as a kid...and so did I.

When I envision Jacey, I see her as a 16 year old girl who doesn't see how truly special she is. That's where our similarities end." (At least I thought so....)

Along with my nieces ideals on the who's who of matching character to famous actor / actress, she went on to point out something else I was completely unaware of... 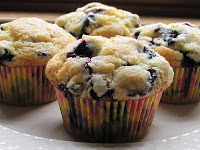 "Auntie, why does Jacey only seem to eat Blueberry muffins? And she only drinks hot chocolate? And what do Raspberry crepes taste like?" 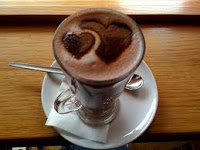 It wasn't until she asked did I realize Jacey has some other traits and tastes that were like me... Maybe it's my Northern Ontario back ground...But I LOVE blueberry muffins...

And have you tried raspberry crepes....if not you are truly missing out!

When I was asked to do a write up for this blog I figured it would be like the others, all about the story line and how the story came about....I LOVE this idea...

I didn't even think that food had an influence on the way I wrote.. but I now realize it does!

I even have the main character associating feelings with scents...One of the main ones being vanilla..(Yet another one of my favourite smells, and tastes....)

I am now a true believer...one who sees how our tastes and likes influence our writing...who knew? Can't wait to see what I'm craving in book two...

Thanks for stopping by to share your food for thought, Hally!

You can find the author and her work here:

Posted by Shelley Workinger at 11:26 AM 3 comments: 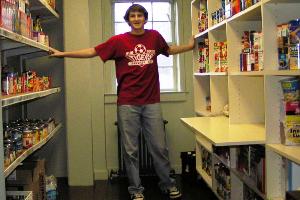 
For his Eagle Scout project, Alex Nestor decided to help restock his local food pantry. First, he organized a food drive with other New Jersey-area scouts, collecting 400 bags of food for local families.

But then the 16-year-old went the extra mile by also rehabbing the entire pantry itself – repainting, tiling the floors and ceilings, plus putting in new shelving units.

What an inspirational example – not just for other scouts or teen, but all of us – of how to recognize opportunities to help and jump in!

Do you know a toast-worthy teen you’d like to see featured here at BWATE? 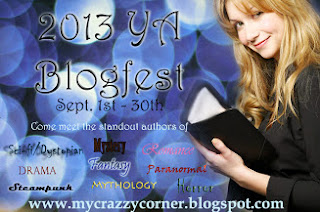 This event, organized by Apryl Baker, features 30 authors; one for every day of the month! One author will be highlighted daily at My Crazy Corner with both a guest post AND a giveaway. I am fortunate to be one such featured author; look for my post on September 22nd, and you can enter to win my giveaway now:


THREE winners here at BWATE? will get an ecopy*
of SOLID (Solid Series Book #1)
*Winners' choice of Kindle or .pdf format 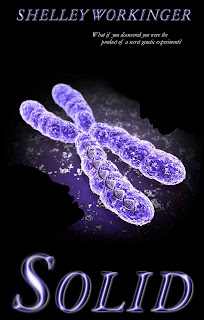 Enter to win through Rafflecopter HERE

Giveaway runs the entire month of September; last day to enter is Sept. 30, 2013.

Posted by Shelley Workinger at 1:02 PM No comments: