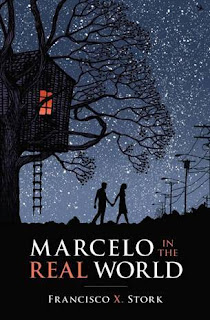 For a long time, there wasn’t any food in this book. There was, however, a lot of music – both “real” music and “internal” music that only Marcelo, a 17-year-old boy that falls somewhere near Asperger’s on the autism spectrum, can hear. Since that “IM,” as he calls it, is so integral to Marcelo’s story, I toyed with introducing the Shakespearean quote: If music be the food of love, play on, and segway into a post on the music aspect of the story.

But since I knew that would be a total cop-out, I decided to scrape my ladle across the very bottom of the story pot for any morsel I could fish out. And, ironically, I found fish. Yes, it did occur to me that this may only be because the book was set in Boston, where seafood is certainly plentiful, but I pushed on. Hey, I’m pretty good at making something out of nothing (just ask my husband).

So I made my first food note when the jerk at work took Marcelo to lunch and they had salmon. And Wendell plotted how to get their co-worker onto his boat so he could basically trap her for sex. And then Wendell left Marcelo behind, Marcelo got lost, and ended up at a fish market. Well, that twofer gave me enough for my blog musing…but wait – there’s more!

The next day, Marcelo finds a picture that both threatens his father’s law firm and arouses feelings in him that he can’t even identify, all of which he tells Jasmine about over a tuna sandwich that he’s too unsettled to eat. By the end of the week, he’s discovered a damaging company memo, which he shares with Jasmine as she has clam chowder.

It seemed to me that every time seafood appeared on the menu, something, well, fishy was going on. Even more interesting was that, as a non-fish person – mainly because of the smell – the only time I was not disturbed by the imagined fishy odor was when Jasmine and Marcelo are in Vermont and she catches a trout that they share for dinner under “a million stars.”

Before I could say, Hold the tartar sauce!, I got to the part where Rabbi Heschel shares her thoughts on the word “urge” with Marcelo: Great word, isn’t it? Sounds like when a piece of gefilte fish gets stuck in your throat and you try to dislodge it by coughing and gagging. Uurrrch. Uuurguh. That’s when I realized that every scene involving seafood also brought out some kind of urge in Marcelo, which is particularly significant not just because of all the new experiences, but because urges themselves are new to him. For me, that connection added an entire second dimension to the book. I KNEW I was onto something with this FOOD-FIC blog!
Posted by Shelley Workinger at 8:56 AM