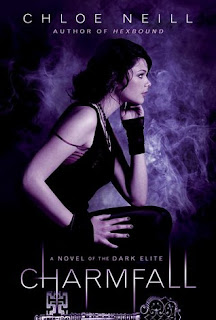 Charmfall finds 15-year-old Lily Parker picking through the pile in [her] palm, eating the raisins and the other dried fruit first to get them out of the way before moving on to the nuts and – last but not least – chocolate chips. As she says: There may not be an order to the world, but there was definitely an order to trail mix.

But her sentiment’s not quite accurate – her world does have an order. No, not the St. Sophia’s School for Girls in Chicago world; that one has classes and schedules, sure, but the social game there is a minefield of unmarked safezones and bombs that de- and re-activate at will. Oh, wait – that’s all high schools, actually.

Anyway, I think Lily was referring to her other world – the newly-discovered magical realm that she’s trying to navigate between trig quizzes. And that world definitely has an order.

There are two metaphorical camps: the Adepts (Lily’s side) and the Reapers. Adepts, in short, are teenagers with magic, their powers ranging from psychic abilities to controlling elements to casting spells. Reapers are also magic-wielding teens, but they use their free time to suck the souls out of vulnerable kids to feed aged-out magical folk. The adepts try to stop the reapers and save the common folk.

So clearly adepts and reapers ride opposite ends of the moral teeter-totter. But their playground still has rules. Both sides hold meetings in marked locations – adepts in enclaves marked with encircled Ys, reapers in sanctuaries designated by quatrefoils. And a scale model of the city showing all assigned areas is conveniently located in a basement room of the school for the magical students’ reference.

There are even rules for arranged adept/reaper cross meetings:

Cease fire means no magic will be used during this meeting. South side rules means we’re fair game after we leave the bridge, but we can’t snipe hunt – so only the people on the bridge can work the magic, not the folks we brought with us.

Now, with all that said, in this 3rd installment of the Dark Elite series, there is a disruption to the order – a loss of magic. For both teams. With the playing field equal, will the adepts and reapers call a truce until they can figure out what’s going on?

Good thing trail mix is high in protein…Lily’s gonna need it. ;)
Posted by Shelley Workinger at 9:33 AM