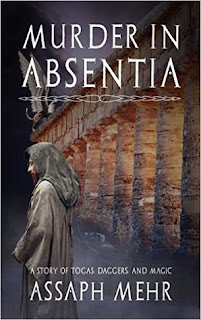 Take one of the greatest empires the world has ever seen. At its peak it controlled vast swathes of land and many different cultures – and their associated cuisines. But what happens when you add a fantastical element to the mix?

Hi all. I’m Assaph Mehr, and I write historical-urban-fantasy – or, as I like to call them, Stories of Togas, Daggers, and Magic. Though set in a fantasy world, the background tapestry is based on the culture of ancient Rome, and to give this world authenticity and richness I do a lot of research in to ancient daily lives.

This, of course, covers food. My protagonist, cheapskate that he is, never passes on the opportunity for a free meal. And when invited to a feast, he very naturally, notes what delicacies were served – together with his somewhat deadpan reaction to them.

This leads us to the meat of this article (pun intended), namely, Fantastic Beasts and How to Cook Them. The world, being based on ancient Rome and Greece, hosts some mythological beasts.

Apicius et al already mentions dishes with ingredients that may sound strange to us. Patina is a Roman dish, somewhere between an omelette and custard. Asparagus and quails may sound like reasonable toppings, but how many of us would join Lucullus when dined on dined on jellyfish patina? Or join my protagonist when he has his favourite, childhood-memories-inducing, brains-and-pine-nuts sausage?

Drizzled with fish-sauce, of course. I always wanted to explore the production of Roman fish sauce – or garum – and, luckily, in the course of one adventure it so transpired that my protagonist – Felix – had to visit just such a factory. Garum, for the uninitiated, is made from salt-fermented fish-guts. As one modern recreator described it, the smell is akin to nasal napalm. Yet the Romans used it as we use ketchup, sprinkled liberally on everything. I sometimes think that writing is just my excuse to study about a period in history I love, from the olfactory-safe haven of my study.

The Romans also had a very practical outlook on life. What do you do with a captured gryphon? Why, you pit it against a bestiarius in the circus arena, naturally! The crowds were well pleased. It was a show to remember for years to come.

Of course, once the beast was slain, there was still a huge carcass to dispose of. Enter Felix again, with his epicurean tendencies. For reasons we shall not go into here, he required some of the tail feathers and sample internal organs of the gryphon. Being a tad loose in the morals department he ended up conning his way into the kitchens to gain access to the beast. He got what he wanted, but that cost him assisting the cook in the preparation of that night’s feast.

Which featured, you guessed it, the unique delicacy of gryphon meat:

The cook walked in after the beast, carrying his knives, and a train of slaves followed carrying plates. He proceeded to carve out bits of both the bird and animal parts and lay them on the plates. The first plate went to Aulus Paulinus who, after the briefest moment of apprehension, smiled and tasted the meats. He looked pleased, and raised a toast to his guests. I was certain some hapless slave had been force-fed this meat before it got to us though, just to make sure that the cook and I had indeed removed all traces of poison. Our turn came, as well, and a slave girl put down the plate with cuts of meat before us. While my little charmed wine had done the trick and the beast was well roasted, I have to say that the lion part was a bit gamy and the bird parts, while nice, tasted remarkably like chicken.

Thanks for stopping by to share your food for thought, Assaph!

You can find out more about Assaph and his
culinarily curious protagonist Felix here:


Assaph has been a bibliophile since he learnt to read at the age of five, and a Romanophile ever since he first got his hands on Asterix, way back in elementary school. This exacerbated when his parents took him on a trip to Rome and Italy - he whinged horribly when they dragged him to "yet another church with baby angels on the ceiling", yet was happy to skip all day around ancient ruins and museums for Etruscan art.

He also loves to cook, and says he will eat almost anything at least once. Though his family has curtailed some of his more experimental endeavors, he hopes some of dishes – in addition to his books, of course – will go down in the annals of history as an achievement worth repeating.

Posted by Shelley Workinger at 3:25 PM