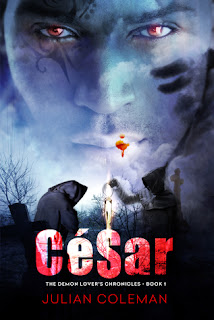 Is Cesar demon or vampire? True evil can be beautiful and beguiling, and he is truly diabolical. His raw masculinity is his lure, and he uses his charm to trap and prey on the innocent.

There was no love in that face, or lust, only naked hunger.

He is conjured up from Hell to deliver revenge onto Rachel, a powerful priestess.  However, he falls in love with her tomboyish sister, Angelina.  Rachel uses her powers to save her sister’s, life, but instead of returning her humanity, Angelina becomes something else, a vampire, priestess and zombie tribrid.

Cesar is undaunted in his pursuit.

His food of choice?  Blood.

Who knows better than newly turned vampires what it means to indulge in their macabre delicacy?  Initially the thought of drinking blood is repulsive, but the aroma of fear pumping through veins becomes intoxicating. The anticipation forces canine teeth to elongate and saliva to leak from the corners of  mouths.

Seduction is a necessary lure.  It is also part of the game of love.  And love is an essential weapon to dominate and control.  Imagine the horror of being sexually enamored one minute, and then drained as a mouthwatering buffet the next...by your lover.

As silent and as subtle as a viper. She cut her teeth on the cow’s throat and felt the hot blood fill her mouth.  The sensation on her taste buds was overwhelming, and her delight was wild.  When the animal fell, Angelina was on top of her, slurping and sucking and draining until she was sated.  She stood up with a loud and bloody belch.  Now she felt more than normal.  Now she felt omnipotent.  She looked at her hands.  The color had returned to her skin.

Blood is more than food.  As stated in Dracula, Blood is the life.

Thanks for stopping by to share your food for thought, Julian! 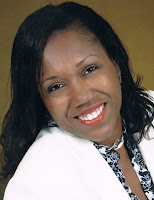 You can find Julian here:

Books on Amazon
Posted by Shelley Workinger at 5:24 PM