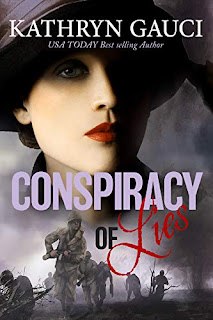 When writing Conspiracy of Lies, set in WWII France, food and wine played an important part in the story. I wanted to portray the difference between the glittering dinner parties of the German elite and the French people who were barely able to sustain themselves because of rationing and food being taken from France to Germany. My protagonist, Claire Bouchard, gets a taste for champagne when she is sent as journalist visit the champagne houses in the Champagne villages during the Phoney War prior to the German invasion of France. The great wine and champagne houses of France were a barometer of impending war much as they had been during WWI, and earlier wars, as the connections between French and German wine houses were very strong. On closer inspection, Claire notes that some of them are starting to hide their finest wines behind walled-up cellars. When she meets the man who will eventually become her lover, she learns even more about fine wine.

Although parts of the story are set in England and Paris, much of the story takes place in Brittany where Claire is sent to work as a secret agent for the British Special Operations Executive (SOE) and liaise with the Resistance. During her time there, she dines with the German Commandant who will become her lover and dines on everything from roast goose to venison with a rich red-wine sauce accompanied by an assortment of seasonal vegetables. She also has real coffee when her friends in the Resistance have nothing but foul-tasting ersatz coffee. Occasionally, she sneaks them out a piece of apple strudel or a ham. Even the breakfast table is a veritable feast: an array of cold cuts of meats, eggs, cheese, bread, and pastries. There is also an incident when the young son is out with his mother in Rennes and has an ice-cream. As everyone knows who the important German woman is with her son, it is served up without her paying for it, and the son leaves it, letting it melt in the warm son. Claire cringes when she knows such ice-cream is not available to most French at that time.

Even after the war, Claire still enjoys her fine wines, and her children cannot understand how she is such a connoisseur until her story as a secret agent unfolds. During several scenes after the war when her daughter, Sarah, tries to ask about her mother’s past, I bring in English afternoon teas, and contrast her mother’s Devil’s food-cake with a chocolate butter icing with that of her French friend’s afternoon teas in London. There, her maid creates wonderful French pastries, visitandes, macarons and madeleines.

Thanks for stopping by to share your food for thought, Kathryn! 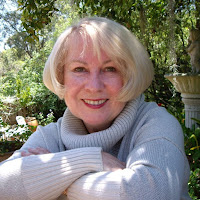 You can find Kathryn here:
KathrynGauci.com
Twitter @KathrynGauci
Facebook Fan Page
Books on Amazon
Posted by Shelley Workinger at 11:28 AM