FOODFIC: Please Welcome Jane Ward, Author of In the Aftermath 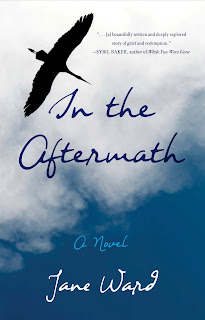 My maternal grandmother immigrated to the United States from Edinburgh and worked for years as a baker in the Boston University dining halls. When summer arrived, she would leave her husband and three daughters behind and pick up seasonal baking work in vacation resorts on Cape Cod.
During my childhood, when her career baking days were behind her, Nana often visited our family, and at the drop of a hat would whip up a batch of what she called “girdle scones,” a quick bread that has nothing to do with foundation garments and everything to do with being cooked on a hot pan—a girdle, in Scots English—on top of the stove.
Years later, confident in the baking skills I learned from watching her, I followed in her footsteps and took a job as weekend baker at a neighborhood bakery. My day would begin at 2 a.m. with baking muffins and scones, and end between 10 and 11 after I pulled my beloved loaves of challah and white sandwich bread out of the ovens. It was a physical job that put my sleep schedule at odds with weekend family time. But I loved that job; I loved watching happy people head home with the delicious pastry I had made.
In the Aftermath opens in April 2008, just as the Great Recession is about to do its worst to many homeowners and small business owners. These are the people whose stories I would tell. As I brainstormed small business settings for David and Jules, the husband and wife at the center of the novel, I began picturing them moving around a bakery similar to the one I had worked at years before. Yes, it was an environment I could write about with authority, but my decision was about more than choosing something familiar. I write to explore the nature of human connections, and the origin story of bread is also one of community.
Before the first brave souls looked at wild, grassy wheat and came up with the idea of grinding it into flour, turning that flour into dough with water and airborne yeasts, shaping this concoction into a cake, and then sticking it into fire, people roamed—rootless—and foraged to live.
Once bread caught on as a reliably available food source, people were able to stop moving to find nourishment. They became farmers, bakers, consumers; they settled close to each other. Communities grew and people thrived. Around bread. Because of bread.
In Jules and David’s fictional bakery community all those eons later, customers would have eaten good, crusty bread and everything else that owes its existence to society’s first humble loaf: scones and muffins, danish and croissants, cookies and brownies and cakes. In their best times, these bakers touched lives—sending sustaining food into people’s homes and bringing them joy. It is this same longing for connection - through work, through relationships – that guides the characters in In the Aftermath as they move through difficult times into a brighter future.
Thanks for stopping by to share your food for thought, Jane!

You can find Jane here:
JaneAWard.com
Twitter @AuthorJane
Facebook Fan Page
Books on Amazon
Posted by Shelley Workinger at 7:58 AM