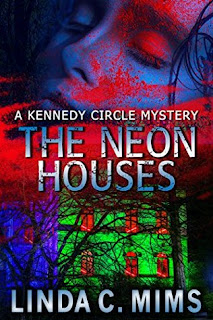 The Neon Houses, set in 2071, depicts two worlds. One world shows a food desert where food is genetically modified, dehydrated, plant-based and powdered, if there’s food at all. The other world is a cornucopia of real animal meat, vegetables, poultry, eggs, fish, and fruit.

The main character, Noel Kennedy, has her feet planted in both worlds and is unapologetically sympathetic to the needs of citizens who have barely enough to eat. In fact, when we first meet her flying her autoplane to the family home of a recently murdered girl, she’s leaning out the passenger window yelling bloody murder at a thief who has just snatched a bag of groceries from an old man.

Back home at the annual barbeque she and her husband host, we see disks laden with platters of smoked meats, grilled vegetables, desserts, and other delectables, sailing through the air. Guests use remote controls to land a disk, or they summon humanoids to take their orders.

This scene is two-fold, lavishly contrasting the two societies, and setting the stage for the next murder.

Heroine Noel goes up against Warren Simpson, a cunning and ruthless villain, who rules the land on the outskirts of her city. He is a murderer, thief, and the purveyor of illegal goods. Yet, when his nephew is set up as a murderer, Warren discards that theory. The kid isn’t like him, and murder is the farthest thing from the kid’s nature.

Simpson gathers his family around the dining room table to debate murder, set-ups, and surveillance. Readers see dishes of roast beef, whipped potatoes and gravy, green beans, fresh tomatoes, and warm bread spread out on a snowy tablecloth. Warren’s wives, their children, and his wayward nephew surround him. When the food isn’t served quick enough, his nephew makes smacking sounds and salivates over the mashed potatoes and gravy. Simpson cuffs him lightly. The scene is normal, almost endearing, and allows us to see the human side of the villain.

In undeniable New Chicago tradition, soy-dog stands, and taco stands dot the area near downtown. When a call comes over the radio warning Noel that crooks have spotted her and her husband scouting the primary suspect, they’re eating at a taco stand under the on-ramp of the Kennedy Expressway. Before they hightail it out of the area, my heroine takes a moment to wipe taco sauce from her husband’s mouth.

It’s 50 years into the future and the world has changed, but food, family, and gatherings remain the same—maybe more for my sense of normalcy than the characters’. 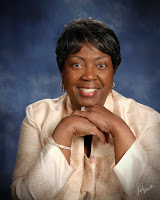 You can find Linda here:

Posted by Shelley Workinger at 9:24 AM