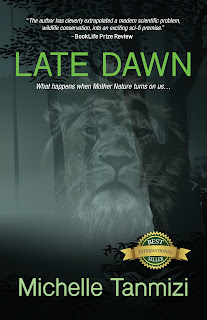 I come from a culture that reveres food and the ritual of eating. Passed around like a fortune cookie is the saying that ‘One lives to eat, and not eat to live.’ But what happens when food becomes scarce in the far-future, dystopian world of Late Dawn, in the year 4848? That is the timeline of my novel.

It is so far in our timeline, it lies on the other side of the horizon of perception where eyes and minds cannot yet reach. I chose such a far timeline for a good reason. I wanted to project an image of a transformed Earth, where climate change had ravaged and damaged it, and where Earthlings (wildlife, nature and insects included) who survived, are living through yet another global disaster. It is a world where humans are no longer Mother Nature’s favourite children.

In this world, we are no longer the apex predator because animals have taken over our territories, and our domestic meat source, like chickens, cows, ducks, etc., have perished. So, for those who crave flesh protein, it becomes necessary to find an alternative solution to animal meat. In the world of Late Dawn, people eat Bio-Meat, a government, laboratory-produced protein. But it creates long term illnesses for those who consume it, side effects from non-natural food products. I believe in eating only fresh, unaltered food, and so it is normal I would write this into my novel. Today, the once popular trend of Genetically Modified foods has lost advocates as people are realising it is healthier to eat natural, unaltered products.

The focalising character of the story, Marra, belongs to an environmental and animal protection agency whose members are all vegans. I am an advocate of eating vegetables because it helps the planet and for me, it also helps the animals. Since January 2021, I’ve become a vegetarian myself and loving it. Environmental issues interest me and like the protagonist of Late Dawn, I believe in trying to help the planet as much as I can.

So, while Late Dawn is not so much about food, it is about wildlife protection and what happens when we ignore the fact that we share this planet with other living beings.

Thanks for stopping by to share your food for thought, Michelle!

You can find Michelle here:

Posted by Shelley Workinger at 9:35 AM