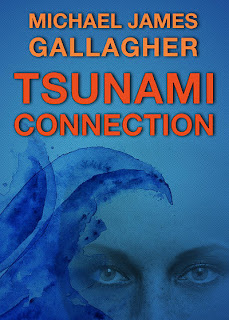 Months spent taking tango courses in Buenos Aires provided most of the scenes relating to tango in the story. Passion for tango spills uncontrollably into life. From gun-metal colored mussel shells to raw beef turning on a spit, Argentinean cuisine reflects a diverse culture. The meal lays bare hopes and then a denouement lends a human aspect to the nature of lust and love.

In this scene I used the meal to set up a fall, to be a little unpredictable.

Tsunami Connection tells the story of a ballsy woman spy, Kefira. Guided by her eclectic intuitions, she builds on a chance meeting. The allure of her homemade body oil and her contagious warmth conspire to cement a bond between Kefira and a tango maestro.

A table thoughtfully set with a crisp white cloth will whet your appetite for Italian cuisine and the potential for a budding relationship. Reviewers say... The book is peopled with characters who are very immersed in their "super-hero" mode but are also motivated by everyday emotions. This food scene opens a door between two previously unconnected people.

The waiter approached the table with a half bottle of white wine and two risottos decorated with leafy lettuce and accompanied by a basket of crusty white rolls sitting beside a bowl of olive oil.
"I hope you are hungry," said Fripo.

"Ravenous," said Kefira, as she tipped her wine glass in his direction and ran her tongue over her upper lip to recover any leftovers.

The pasta came next. It was decorated with chopped garlic and smothered with caramelized onions. Crushed walnuts and a hint of béchamel coated the wide noodles topped with fresh parsley, served on a bed of lettuce. Ever attentive the waiter appeared to top up their wine glasses. The second glass of wine started as they sampled the pasta. Kefira knew enough not to eat the whole plate of noodles. Fripo paused in the telling of a joke about a Jewish restaurant owner in New York as the waiter brought a full bottle of Argentinean red wine from Bodega y Vinedo Maurico Lorca, called Inspirado 2008.

"This wine is an excellent choice selected for you by the owner. You will see that it goes down like liquid velvet. Enjoy your meal he said with a flourishing twist of the wrist, preventing spillage as he finished pouring Kefira's glass. As a visitor to the country, the waiter asked her to do the honours with the wine. Kefira smiled widely and let the bouquet pass over her nose. Then she sipped a small amount of wine and then sloshed it around in her mouth and swallowed the wine with a very appreciative nod to the waiter, never taking her eyes from Fripo. Her date blushed at all this attention and the waiter, disappointed that he was unable to distract this strikingly attractive woman from her much older partner, busied himself with serving the thin sliced beef seared slightly and coated with pepper. When the waiter left, Fripo continued his joke.

Months spent taking tango courses in Buenos Aires provided most of the scenes relating to tango in the story. Passion for tango spills uncontrollably into life.

From gun-metal colored mussel shells to raw beef turning on a spit, Argentinean cuisine reflects a diverse culture. The meal lays bare hopes and then a denouement lends a human aspect to the nature of lust and love.

Special brands of booze, wine to go with every occasion and aromatic coffee to heighten tense situations all add zest to character development. Novels without food are like characters without clothes.

You can find more about Michael
and Tsunami Connection here: