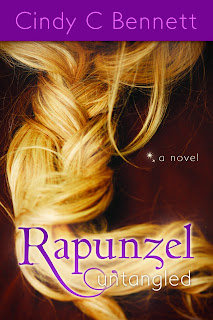 Imagine living your life only exposed to foods that someone else has decided you can have. Close your eyes and think of your top five favorite things to eat, the things that bring you the most pleasure. Now imagine being locked in a tower where not only can you not have those foods, you haven’t even heard of many of them.

In Rapunzel Untangled, a modern-day retelling of the classic fairytale, Rapunzel is kidnapped as a baby and locked in a tower by the crazy witch Gothel. That means that she doesn’t get to experience teen life as most American’s do—or teens from anywhere, for that matter. As I tried to imagine what things would be missed, my first thought went to chocolate. Of course, there are very few situation where my mind doesn’t go to chocolate, but that’s another story.

When Fane first comes to Rapunzel’s tower and climbs up for a visit, like any typical seventeen-year-old boy he thinks about food. On his second visit he comes prepared with pizza and garlic bread. Rapunzel has never had anything like it before. Try to imagine for yourself never tasting either of those, and then having them for the first time. I tried to convey her joy at tasting something we take for granted as commonplace.

Fane also exposes her to M&M’s and Skittles. Rapunzel’s never had candy of any kind before, so the sugary treats also give her endless pleasure. Thanksgiving, our excuse for gorging ourselves silly on food, is also a new experience for her—including stuffing ourselves then following it with pie.

Food for most of us is something we don’t really give a lot of thought to, other than when we’re really craving something, so I wanted to be sure to show Fane’s almost lackadaisical attitude toward food which is the norm for those who have enough food to not have to worry about it, and Rapunzel’s discovery of things she’s never tasted before.

Food is by no means the main theme in Rapunzel Untangled—she has plenty of other things to deal with like discovering she’s been kidnapped, and that she’s the main character in a twisted plot of witchcraft, magic, and murder. However, it’s an important side note to her story as she steps forward and discovers the world she lives in but had been kept hidden from. So grab a bag of M&M’s, or a pizza, and enjoy the ride!


Cindy C Bennett is the bestselling young adult author. She lives in Salt Lake City, Utah with her high school sweetheart who also happens to be her husband. She's the proud mom of two sons and two daughters, as well as two daughter-in-laws. When she's not writing (or any of the many activities that go hand-in-hand with that) you might find her on her Harley Davidson, cruising the canyons near her home. She happens to adore her readers, and is grateful to them for reading her work and giving her the chance to do this thing that she is so very passionate about. Yup, she's living the dream!

Posted by Shelley Workinger at 9:08 AM