FOODFIC: The School for Good and Evil - Soman Chainani 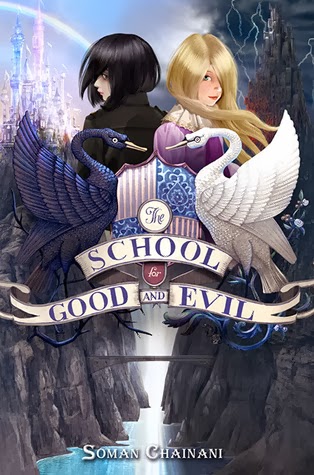 When its jacket compares a book to Harry Potter, it’s almost a guarantee that the story within won’t measure up. In fact, I’ve only read one novel that I’d put in the HP category, and that’s Skin Hunger.
Until now.

As with HP and SH, the glory of this book lies in the details: the good vs. evil students split between a crystal palace and a dungeony tower, separated by a lake that is itself divided down the center – clear water meeting swamp sludge.

And surely the “Evers” and the “Nevers” themselves must also be readily divisible, right?

Of course not; like in real life, people are never so easily categorized! (And if Chainani’s characters were, this would be a terribly boring book.)

Sophie, the obvious princess, and Agatha, the clear witch, arrive on campus together, only to be assigned to the opposite (and wrong?) schools. Sophie is dismayed by the dorm and its smell of unwashed bodies, mildewed stone, and stinking wolf. She’s repulsed by her new roommates: a tall girl with greasy hair and a terrifying tattoo of a buck-horned, red-skulled demon around her neck, an albino with red eyes feeding stew from a cauldron to three black rats, and a smiley but wicked girl who’s dismayed that it’s against the rules to kill other students.

Even the meals are so distasteful that she doesn’t cave in to the soggy gruel and pigs’ feet until the 3rd day!
Interestingly, Agatha is equally displeased by the offerings of the good school where she’s been assigned, but she focuses all of her energy on getting out of the whole situation and returning home to Gavaldon with her friend.

Seems like unhappy Agatha should have no trouble grabbing miserable Sophie on her way out the gate and returning to their good-enough-ever-after village. Problem is, Sophie doesn’t want to leave – she wants to switch.

And by the time Sophie does finally concede that leaving might be the best choice, Agatha suddenly decides she wants to stay! Oh, don’t yell at me for the spoiler, folks – those twists don’t even get you halfway through the text and there are many more to follow.

Because who’s “good” and who’s “evil” flip-flops as many times as there are chapters. That’s right; just like in real life, the “good” characters don’t always make the right choices, and the “bad” guys aren’t necessarily evil to the core. The beauty of this is that a reader can see herself as a princess on one page and a witch on the next. To be able to put oneself into the position of every character not only makes for a great read; it might help you read other people better when you finally do return to reality. ;)
Posted by Shelley Workinger at 9:33 AM