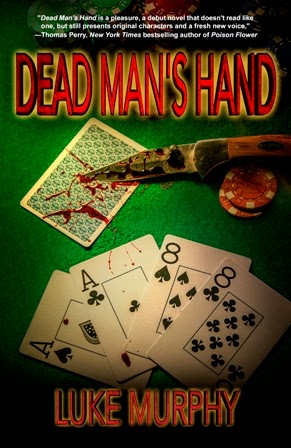 When I turned fifteen and started reading adult chapter books (Oh no, there is no way I’m telling you the year to show my age LOL), I always found myself asking the same question:

When do these characters eat, sleep, use the restroom, etc.?

There always seemed to be unanswered questions left by authors, those little things that we all do, but that rarely get mentioned in books.  It’s not that I want the author to go on and on about a character’s eating or bathroom habits, but some small mention would suffice.

So when I first contacted Shelley Workinger about a possible blog post, and she told me what her blog was all about, I thought it was a great idea. She was really on to something when she mentioned to me that a fictional character’s diet can really tell the reader something about that character. Some readers want to know these minor details.

My debut novel, DEAD MAN’S HAND, is an International bestselling crime-thriller that was released in October 2012. The novel takes readers inside the head of Calvin Watters, a sadistic African-American Las Vegas debt-collector, who was once an NFL rising-star prospect, now a fugitive on the run.

But for this post, I wanted to write about the new novel I’m currently working on, specifically the main character, detective Charlene Taylor.

To put it lightly, Charlene Taylor is a self-hating, alcoholic, one-night standing, tough but broken individual who never knew her father. She was the “boy” her father never had, and has decided to follow in his footsteps as a member of the LAPD.

So in order to demonstrate the kind of character Charlene is, I needed to really sell it with her diet and eating habits.

Charlene is an “eat-on-the-run” kind of gal. Grab a muffin or fruit on her way out the door. Living a fast-paced, almost carefree single lifestyle, she has take-out restaurants on her speed dial, and the local neighborhood sushi bar is familiar with her frequent post-sex phone calls for delivery. I felt that having a sushi restaurant on speed dial, where they are used to her “dinner for 1” orders, shows Charlene’s age (I think of sushi as a more youthful meal), health concerns (obviously sushi is a very healthy food), and her loneliness (ordering always for one and having it on her speed dial).

To me, this was the ultimate form of using food and diet to show who a character really is and allow a reader to make his/her own judgements and conclusions.

Food/diet is a very important tool that can be used by authors to “show” instead “tell” readers about a certain character and his/her traits.

My newest novel is still in the editing stages, but it has been a fun project.

Thanks for stopping by to share your food for thought, Luke!

Luke Murphy lives in Shawville, Quebec with his wife, three daughters and pug.

Catch up with Luke at these sites:

What happens when the deck is stacked against you…

From NFL rising-star prospect to wanted fugitive, Calvin Watters is a sadistic African-American Las Vegas debt-collector framed by a murderer who, like the Vegas Police, finds him to be the perfect fall-guy.

…and the cards don't fall your way?

When the brutal slaying of a prominent casino owner is followed by the murder of a well-known bookie, Detective Dale Dayton is thrown into the middle of a highly political case and leads the largest homicide investigation in Vegas in the last twelve years.

What if you're dealt a Dead Man's Hand?

Against his superiors and better judgment, Dayton is willing to give Calvin one last chance. To redeem himself, Calvin must prove his innocence by finding the real killer, while avoiding the LVMPD, as well as protect the woman he loves from a professional assassin hired to silence them.


"You may want to give it the whole night, just to see how it turns out."
—William Martin, New York Times bestselling author of The Lincoln Letter

Posted by Shelley Workinger at 12:17 PM