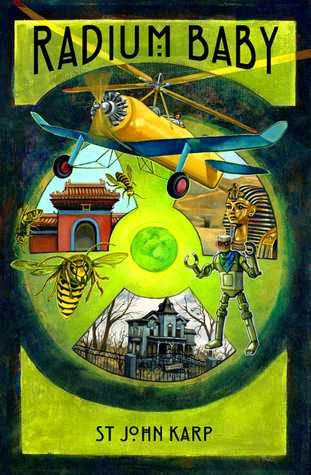 My favorite ice-breaker on a first date is, "If you could travel back in time to any period, when would you go?" You can tell a lot about a person by how they answer. A lot of people seem to want to meet Jesus, which is legit, although they conveniently forget to set aside time to learn Aramaic first. My own choice would be the 1920s. They were in the middle of a post-war cultural revolution — it was the golden age of the silver screen, Dadaism was turning into Surrealism, you couldn't sneeze without hitting ten radioactive consumer products, and they spoke English. The sheer amount of cool stuff going down made it a great place to set Radium Baby. The only problem for an aspiring alcoholic like me is that it's also boom-smack in the middle of the American Prohibition.

But the characters in Radium Baby don't let that stop them. You could always throw a fuzz junket on bathtub moonshine, or else get a bit squiffy on giggle water at the blind tiger. My favorite Prohibition-era cocktail has to be the Sidecar — an intoxicating mix of two parts Cognac, one part Cointreau, and one part lemon juice, served with sugar on the rim. I drank at least four of these (I lost count) as research for this article, and I can confirm that by the end of the night I'd completely forgotten that it wasn't actually 1927.

The Sidecar may have been a bit frou-frou for Prohibition tastes, though, especially as it was a European cocktail and all those fancy brandies were hard to come by. Herbie Wise would have liked them, I think, because he has a taste for the finer things in life. What really fuels a public drunk like Adrian Ember, though, is gin. This makes the Martini the cocktail of choice for the adults in Radium Baby. You take your vermouth, shake it up in the cocktail shaker enough to coat the ice, then pour it out. Then you pour in your gin, shake it again, and pour. Garnish with green olives. I have a passionate love for salt, so the dirtier the Martini the better. Also, don't let any unlicked rube tell you it's one part vermouth to six parts gin — too much vermouth is the quickest way to ruin a perfectly good Martini. Winston Churchill said the best way to add vermouth to your Martini was simply to raise your glass in the direction of France.

While Ember and Wise like a tipple, Mrs. Cholmondeley is a die-hard teetotaler. Even she, however, seems to have her own unwitting crutch in the form of June Kennedy's Prune Remedy. This Prune Remedy was inspired by a few real health tonics from the time, but particularly Lydia E. Pinkham's Vegetable Compound. Pinkham's Compound contained a good wallop of "medicinal" alcohol, which garnered it an unexpected level of popularity in the Prohibition. There are endless testimonies in Mrs. Pinkham's advertising from housewives whose kids are driving them nuts, but after a bottle or nine of Vegetable Compound they feel right as rain. Pinkham's Compound still turns up in pop culture from time to time, in songs like "Lily the Pink", or as Ephraim's Extract in a recent episode of Quick Draw.

If your blood runs more towards the healthy side of things (and if it does, I can't think why you're reading anything I've written), then your 1920s self might have downed a few radioactive health tonics. Yes, people in the '20s were drinking radioactive water, often every day under the misapprehension that it would cure them of wambling trot or the strong fives. In Radium Baby Gloria drinks from a Revigator — a household radioactive tank which you'd fill with water to be steeped in healthy radioactive rays. For good measure these things would also leech arsenic, lead, and uranium into the water. Over three years one man in real life drank 1,400 bottles of a radioactive tonic called Radithor, and he swore it did wonders for his health right up until the day his face fell off. He had to be buried in a lead coffin.

Valerie and Alexander Pepperpot also partake of a goodly dose of radium in the form of a radioactive duck. The dish is a party piece that, when prepared properly, will create a chemical reaction that expels air through the duck's throat and makes it quack as it's being carved. There was a little truth-bending here on my part, but the recipe is real — only the recipe was medieval and the secret ingredient was mercury instead of radium. As far as I know there aren't any records of people dying from eating these mercury birds, but then I don't imagine they fared much better than the Pepperpots did.


For those who want to throw their own radium-themed wingding, I'd recommend against irradiating the local poultry. Instead, let me take this back to where it began — booze. A great radium-themed drink is the Grasshopper, a mix of one part cream, one part Crème de menthe, and one part white Crème de cacao. You wind up with a lurid green cocktail that is absolutely delicious. Here's mud in your eye, fly-boy.

Thanks for stopping by to share your food for thought, St. John!

Connect with the author here:

Posted by Shelley Workinger at 8:07 AM