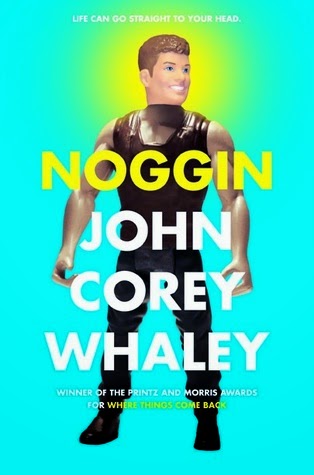 Noggin starts with Travis Coates waking up. Not from something as simple as a nap, nor as extensive as a coma; Travis has been cryogenically frozen for 5 years. More specifically, his head has been on ice all that time, waiting for a donor body (and medical advances) to facilitate his revival.

Now you know that I need to know how that old-mouth-to-new-digestive-tract connection works.  Well, we don’t get to see Travis ingest anything until his father brings him home. That first night back, Dad makes him eggs – which go down just fine – and no follow-up statements or inquiries are made to suggest any meal since the wake-up have gone otherwise. There’s no mention of any food or drink in the hospital at all, and though I know it’s possible for Travis to have subsisted there on IV fluid, they surely wouldn’t have discharged him without testing that new fused esophagus!

So I have to pause in my reading to flesh out the stages in my own mind: transitioning from an IV to water and juice, maybe moving on to Jell-O, then applesauce, brothy soups for lunch, mushy oatmeal for breakfast, etc. I imagine Travis graduating from one level to a denser, chewier one each day until presumably summiting at some clinical version of beef and potatoes. And all quite unremarkably, or we’d have been told otherwise, right?

Okay, now I can return to the story already in progress. And I find that, unfortunately, Travis’s social assimilation back into the world doesn’t go as smoothly as the digestive part did. Reconnecting with his parents is easy, sure, but his old best friends don’t even come to visit him in the hospital. Of course, they’re now 21 while he’s still only 16, so their lifestyles have certainly diverged. Travis hasn’t changed at all (except that he’s no longer battling the terminal cancer that forced him to opt for the radical surgery); he feels like he’s merely been asleep for a few days.

In stark contrast, his (ex?) girlfriend has moved on so far that she’s now engaged to another guy. Okay, I can see her reluctance to rush to Travis’s bedside, but what excuse could the male best friend have for staying away? Luckily (for us, not him, obviously) Travis is as confused as we are, so this progression is graciously served up bite by bite, making this Noggin’s bizarre premise quite easy for readers to swallow. ;)
Posted by Shelley Workinger at 7:00 AM