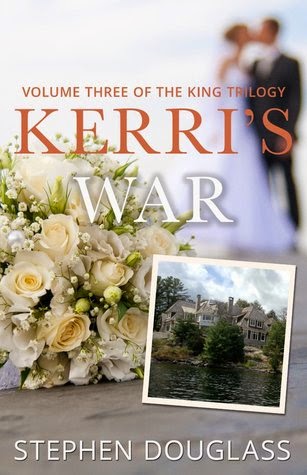 Many thanks to Shelley Workinger for inviting me to contribute a post in connection with my novel, Kerri’s War, to her wonderful blog: But What are They Eating? I was honored and thrilled that she had given me an opportunity to expose Volume Three of The King Trilogy to readers in a very unique fashion. I accepted the invitation without hesitation.

Even though my post would chronicle an event close to the end of the third volume of an epic trilogy, the invitation still struck me as a fascinating idea. “Everybody eats,” I said to myself. “Surely it must follow that readers would be interested in what the main characters of their chosen novels are eating,” I further concluded that Shelley was way ahead of the curve when she initiated her blog. Clearly, she was thinking outside the box. Her timing was perfect. I had just finished reading an historical fiction novel, set in the sixteenth century, in which the Spanish conquistadors, determined to relieve the Central American natives of their gold, were perpetually preoccupied with finding sufficient food to remain alive. There were no grocery stores or restaurants, conveniences we take for granted today.

The King Trilogy is a thrilling epic, spanning four decades and featuring the trials and tribulations of the King family and their connection to an inconvenient fortune. It is stolen and it is cursed. It ruins the life of everyone who touches it. The Bridge to Caracas, Volume One of The King Trilogy, is the story of how the inconvenient fortune was accumulated. Using the Peace Bridge as a fulcrum, an audacious criminal stole $325,000,000 via the mechanism of gasoline tax evasion. The Tainted Trust, Volume Two of The King Trilogy, is the story of what happened to the stolen fortune and its devastating affect on everyone who knew of its existence.

In Kerri’s War, the subject of this post, and Volume Three of The King Trilogy, Kerri King, a thirty-three year old woman, goes to war against Enerco, a corrupt Houston based conglomerate. At the outset of her conflict, she meets and falls in love with Steve Monteith, a perfect ten in her mind. Unfortunately, he is engaged to marry Christine Stewart, a Toronto socialite. Kerri’s dream is shattered when Steve marries Christine, but it is rekindled when he ends the marriage, in dramatic fashion, at the lavish Naples, Florida wedding reception. Once again Kerri’s dream is shattered when Steve is involved in an horrific automobile accident, resulting in a near life ending coma. The two become inseparable as Kerri nurses Steve back to health. Late in the story, Steve invites Kerri to join him in a wine tour of the Niagara Region. He plans to ask her to marry him.

It is at this point in the novel that I wanted the two lovers to be in a very romantic setting, one befitting a marriage proposal. Having endured so much adversity, the two deserved nothing but the best. I chose Niagara on the Lake, in Ontario, Canada, one of my favorite places on the planet. The happy couple have enjoyed the tour, blissfully unaware that they are being followed by a professional killer, contracted by Enerco to kill Kerri.

Following the tour and prior to dinner, Steve led Kerri to the cosy and beautiful Churchill Lounge at The Prince of Whales Hotel.. It was there that he asked her to marry him.

A stunningly beautiful five star hotel at the corner of King and Queen Streets, The Prince of Whales was one of the finest in the entire Niagara Region. Its rust and white brick exterior walls and cedar shake mansard roof line with dormer windows made it look like it had been transplanted from downtown Paris. Its false porch and pillars were festooned with hanging baskets containing thousands of local flowers of every color of the rainbow. It was a destination for tourists wishing to stay and enjoy the visual and gastronomic delights of the area.

Instead of the intimate privacy Steve had anticipated for his proposal, the two quickly became the focal point for everyone in the Churchill Lounge. The happy couple was besieged by well wishers and curiosity buffs, all anxious to congratulate them and interrogate Kerri. The session continued to grow in intensity until Steve raised his hands and formed a T. “Timeout,” he shouted as loud as he could. “Thank you all for your kindness. I wish we could stay longer, but we have to be at the Shaw Theatre at seven, so we have less than an hour for dinner. We really must leave now.” He reached for Kerri’s hand and led her to Escabèche, the hotel’s famous dining room.

HERE IS WHERE I NEARLY MESSED UP. I won’t bore you with the original manuscript text, but I will admit that it failed to describe what Kerri and Steve ate for dinner. When my wife, one of my strongest critics, read this part of the manuscript, she frowned and said, “How can you have your novel’s principal characters, newly engaged, eating in one of the most famous restaurants in the world, and not tell your readers what they ate? You’d have to assume that many of them would want to know.” She was right. How could I have made that omission? My only excuse is that I eat to live. By contrast, many people live to eat.

Armed with my wife’s rebuke, I climbed into my automobile, drove to The Prince of Whales Hotel, reviewed its amazing menu, made my selection, then re-wrote the dinner scene.

Here it is, as it appears in the novel:

They were warmly greeted at the dining room’s entrance by the maître d’hôtel. “Congratulations, Mister Monteith and Miss King. Dinner is on us. Our sommelier will see to it that you have a bottle of our finest champagne to assist your digestion. Please follow me,” he said, then led them to their table. They were treated to a dinner consisting of roast carrot and leek soup, Escabèche Caesar salad, and Northern Canadian elk, with creamed potatoes, sautéed mushrooms, and heirloom spinach. Even if there was enough time for desert, (apple trifle with Mascarpone cream, vanilla and orange juice), both would have declined. They were full and had thirty minutes to curtain time at the Shaw Festival Theater, one kilometer from the hotel. It was time to see Pygmalion.


Thanks for stopping by to share your food for thought, Steve!

You can find Steve here:

Author Bio:
I was born, raised and educated in Canada. I spent the first half of my career working for the two largest oil companies in the world: Exxon and royal Dutch Shell. I spent the second half working for one of the smallest oil companies in the world; my own. We have three sons and one daughter, all of whom are grown and “off the payroll”. Now retired, I spend summers with my wife, Ann, and our two cats, Abby and Samantha, at our Canadian home near Niagara Falls. We winter at our Florida home in Port St. Lucie. When I’m not writing, I’m reading, traveling, or playing horrifying golf. I plan to write until the day I die, probably longer.
Posted by Shelley Workinger at 2:00 PM