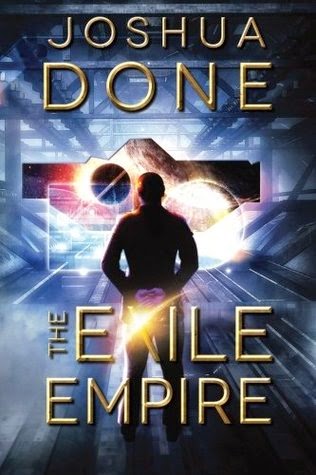 A few days ago I received a pleasant surprise in the form of a Goodreads message from Shelley. She wanted to know if I would be willing to talk about the food in my story and the significance and story behind it. Immediately I thought of one meal that stands out in The Exile Empire. It took an invasion, thousands of lives, and the formation of an entirely new economy for the new recipe to exist.

One of the primary components in The Exile Empire is obviously the fact that humans have been dispersed from their old area of space. The problem with such diaspora in the vastness of interstellar space filled with hostile enemies is the relative lack of resources, and chief among them food! This had become more than an inconvenience by the time the major events of the story began to unfold and the human exiles were getting quite desperate.

But that was when they found a new system with edible plants and animals a-plenty. There was only one catch. The planet was in a system crawling with hostile enemies that had just conquered the natives on a nearby planet and the humans would have to fight their way to the new food source.

After the initial scouts are attacked the remaining human fleet springs into action, moving to protect both their people and the precious food on the planet below. After the carnage that ensues there is still a major problem in that most of the edibles are either in raw, indigestible form, or spread around the planet in roaming herds that weren’t big enough to feed everyone.

That is when Karen, an economic and business savant from the old civilization, was brought in. Over the course of several chapters she takes the rag-tag remnants of a mixed civilian and military fleet and is able to create a fully functioning economy and foodstuffs supply chain in only a few days. Now, of course such a supply line would be highly limited in what it could produce. The two main foods that resulted from this endeavor are a grain called a sand nut and meat from a creature called an Abe.

The sand nuts had to be refined because in their raw form they contain a powerful laxative (something a few of the initial colonists lacking caution found out in humorous fashion). The Abes were similar to earth cattle and because of this similarity people started calling them Alien Bison when they first encountered them. This lead to the abbreviation ‘A’ ‘B’ which Wen said aloud sounds like “ABE” and after a few rounds of repetition the name stuck. The end result of all these shenanigans was a pita-bread-like wrap around an Abe meat filling.

These resulting Sh’in Wraps (named for the planet) quickly became a staple in the new civilization and they appear in subsequent stories throughout the series. It is amazing how much history and work can go into the simplest of foods, and science fiction, since it involves people and supply chains, should be no exception. I think that the Sh’in Wraps are an excellent example of simple food created by a complex setting.

Thanks for stopping by to share your food for thought, Joshua!

You can find Joshua here:

Books on Amazon
Posted by Shelley Workinger at 12:24 PM