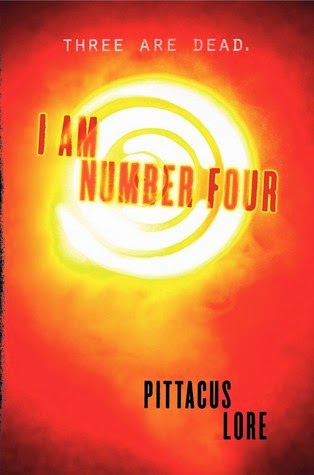 When we first meet our hero – Number Four – he’s Daniel James of South Florida. But not for long. You see, Four is literally the fourth of 9 Lorien Garde who are hiding on Earth from Mogadorian hunters until their planet is safe to return to. The methodical elimination demands that once #3 is killed, Four is up next. So within pages of meeting him, our hero Daniel must assume the new identity of John Smith and relocate to Paradise, Ohio, population 5243. The size of the town is important, not because it makes it easier for now-John to blend (it’s actually harder, since new people stick out like Dopey’s ears in small towns) but because it’s nearly impossible for the larger-than-believably-human Mogadorians to blend.

At least Four is not alone; he travels with his “father” Keeper Henri, who stays Henri in every town for simplicity’s sake.* And Henri didn’t choose Paradise because it’s homey; he prefers they not get too attached to anywhere or anyone since they may/probably might/most definitely will have to leave town on very short notice. So of course this is the one place over after 11 years of moves  that Four does make a deep personal connection. And, ironically, he connects with Sarah in the “homiest” place in the school – the home ec kitchen. They bond over cupcakes and shared stories and a mutual frenemy. It’s all more 15-year-old Four has ever known, maybe even hoped for, which is why we get that sinking feeling that the day she becomes too hard for him to leave is exactly when he’ll have to go.

But what if this time he stays? What if he stops running and tries to fight back? Perhaps that could be the recipe for a win…

*You have to think it’d be even easier for Four to call Henri “Dad,” but he never has, even though his birth father was killed along with the rest of his family in the wars on Lorien years ago.
Posted by Shelley Workinger at 8:29 AM