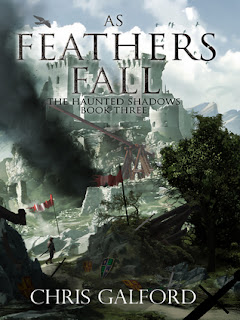 In The Hollow March, and its sequels in The Haunted Shadows series, the nation of Idasia is consumed with war. War means famine. It means thirst. It means struggle. Many of the people within are thus not able to count on reliable meals like the ones mentioned below—it is the plotters, the ones left behind, who have time for such extravagance. Rather, for those fortunate enough to find themselves along one of Idasia’s many rivers, a simpler meal of salmon and eggs might make a day or, for soldiers, scavenged berries and hardtack—a dry sort of biscuit that might once have been bread—or a simple repast of soup might have to suffice. By the time of the second novel in the series—At Faith’s End—even that can be hard to come by. Of course, all these people also live at a time when pure drinking water is less common than heavily watered wine—called Ramil—as the alcohol is used to guarantee anything untoward in the water is purged for drinking…

Basically, it can be a little hard at the moment to get a decent bite to eat in the Idasian Empire (follow the link to find a map of the empire for easy reference!). It’s not that the expansive nation suffers from a lack of creativity; just ask the cooks at Vissering Keep, for example. For them, in spite of the conflict ravaging the lands outside (and in fact, in part, because of it), there are no lack of important figures rushing through the premises at all hours, and they come from a people with large and varied appetites.

For these, lunch (Mittagessen, in the native tongue) is the greatest meal of the day, and it is swimming with flavor. It’s good to be the king, but it’s not bad to be a prince, a count, or even a minor lord, either, and here, in the halls of the Count Palatine Cullick, that phrase is brought to fruition in the form of sausages, bratwurst, and nearly everything pork-related braised to roasted, juicy delight. For those closer to the forests, or still with secure trade lines, boar and venison also make for a fine course at times. A smattering of carrots, cabbages, and layered casseroles add a touch of flavor to the side of such meals, but neither honey nor jam are likely too far from the eclectic mix. Coming from a temperate land pulling in its wealth from the great central and fertile plains of the continent, there is no shortage of things to consider.

These folk tend to like to draw out their flavor in more natural ways, though. While honey and jam are fine extravagances for zest, the most popular herbs are milder: parsley, thyme, laurel, chives and nutmeg tend to temper the natural tastes, while the garlic preferred in the southernmost reaches of the empire have yet to spread popularly beyond that coast.

Yet it is worth remembering a nation is not built merely on what those whom have plotted civil war from the highest strata of society digest. Rather, a society is sustained by the people at the ground level—people like the mercenary and exile Rurik Matair, or the soldiers of the Imperial army, as they wage war against enemies both abroad and within. In other words, those folk mentioned at the beginning of this article.

These differences in experience, though, are just the sort of things that add layers to the delectable world of Rurik Matair, the Cullick family, and all the myriad characters caught between them in the struggle for reason and stability in a troubled land. The plotting Cullicks dine on nothing but the finest, while those churning through the effects of their actions have little need for their hearty meals—they are a little more interested in drink, if it could take their minds off the heavy burden of survival for a time.

Hard to believe the world is in the midst of a renaissance, isn’t it? If only things would settle down, the culinary artistry would likely see its own revolution—but one can hardly control what revolutions will come slinking about the door when someone’s opened the bottle of human ingenuity. This is the world to which Rurik Matair finds himself, an exile for a crime he didn’t commit, hungry for a justice he cannot even wholly fathom, and joined in his particular meal of earnest revenge and self-doubt by a band of sellswords unaware of how their petty troubles put them at odds in a conspiracy of old families and the return of old magicks…

Thanks for stopping by to share your food for thought, Chris!

You can find Chris here:

Posted by Shelley Workinger at 9:36 PM