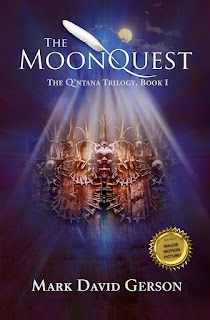 What do you do when you’re invited to dine with cannibals? That’s Yhoshi’s dilemma in an early scene in The MoonQuest, the first book in my Q’ntana fantasy trilogy.

Yhoshi’s gaze shifted nervously from Bold’ar, cleaning his second bowl of stew with a long black tongue, to the two massive cooking fires that danced at the far end of the hall. Loud crackling pops exploded from one, where a sapphire oval of oil-brushed p’yan sizzled. A man-size cauldron bubbled into the second.

Do you eat what your hosts are eating? And if you don’t, do you risk finding yourself working up a sweat in one of those man-size cauldrons?

Yhoshi said little at first and ate less. He picked guardedly at the strange stew that filled his bowl, wrinkling his nose at the curls of aromatic steam that rose lazily from it. I devoured mine greedily. Served only on rare occasions, the lustrous orange-yellow concoction was one of my favorites, its naturally sweet broth an ideal base for the red bela nuts, green zanga fruit and elegantly thin strips of purple gela’aa that floated within.

The good news, as Yhoshi soon discovers, is that even though his Tena’aa hosts want everyone to fear them as vicious man-eaters, they are vegetarian…and gentle. They’re also terrible teases.

Gwill’m bugged his eyes, bared his teeth and lunged. All color drained from Yhoshi’s face.

I had lots of fun with that scene, not only because Yhoshi needed a good prick to his ego. But when you’re fashioning a hitherto-unknown world from scratch, everything is made-up…including the food! And that’s great fodder for the imagination.

The MoonQuest and its StarQuest and SunQuest sequels are filled with exotic food and drink, among them the speckled tosti fish you can swallow in single gulp (raw, if that’s to your taste!); the stick-like tikinà fruit you crack open to get at its soft, crimson-seeded flesh, and the o’aka gourds that can be scooped out to make a sweet soup…the perfect accompaniment to your late-night Q’ntana Trilogy reading. As the old adage goes, “O’aka soup, sweet and red. Just the thing for after bed.”

Thanks for stopping by to share your food for thought, Mark David! 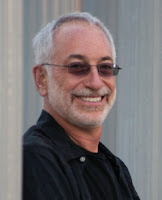 You can find Mark David here:

Books on Amazon
Posted by Shelley Workinger at 11:21 AM