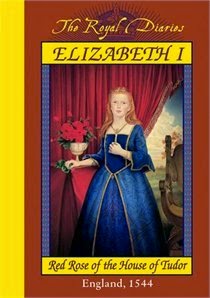 I loved how this format gave the young heroine a big voice. This novel introduces us to Elizabeth I, daughter of the infamous Henry VIII and his scandalous 2nd wife Anne Boleyn. And through Elizabeth’s diary, we learn that she’s just like any girl in any century, longing for the love and approval of her father. This peeling back of layers to reveal a real person (where used to be only a printed name in a textbook followed by a few carefully chosen facts and dates) reminds me of Philippa Gregory’s work. I say all the time that if her books were in print when I was in high school, I’d have been a much better history student!

So for either – or both – series of books, what is it that so handily captures readers? Is it the writing? The girls’ voices? The female perspective?

Or could it be the food?

Okay, it’s not the food if we’re talking appeal, because, well, historic food is historically disgusting. In Anne’s case, her father’s favorites are goose, swan, rabbit, lamb, quail and lamprey eel. Blech. I have no idea if they sent royal fisherman to catch the eels in the wild or if they just hauled the suckers up out of the moat – not that it matters – but that eel actually lost to the swan in my grossest delicacy ranking when I read that they turned the swan’s neck into pudding. It’s just too much for my 21st century American stomach to handle.

Of course it gives me greater respect for Anne and her half-sister Mary and all the other women for whom such bad food was just the cherry on top of the sundae of crap dumped on them by the ruling men. Women were treated and traded like cattle – exquisitely, prize-winning cattle – with no choices socially, academically, and even gastronomically. Sadly, the meals are just one of many details of court life that leave a bad taste in our mouths, yet the stories of Anne and her peers make us hungrily read on.
Posted by Shelley Workinger at 12:34 PM