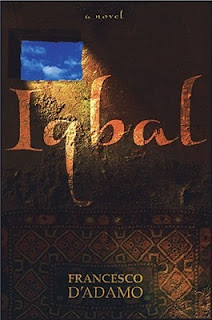 13-year-old Fatima works in a carpet factory, bonded to master Hussain Khan to pay off her family’s debt. Khan keeps the total amount owed on a slate beside each child worker's loom, lightening the debts by one rupee for each full day of satisfactory work. When all the debt lines have been erased, the children will be free to go home. Fatima, who’s been indentured to Khan for 3 years (and to 2 other masters before him), doesn’t know which chalk marks represent her running tally and which spell out her name because she never learned to read.

Her entire young life consists of carpet-weaving: a work day that runs from sunrise to sunset, opening with chapatti and dal half an hour before dawn, served by the master’s wife in one large bowl to be shared amongst the 14 child laborers. They do break for a lunch of chapatti and vegetables, but, as Fatima relates, break lasted an hour…hunger a good deal longer.

And in the early days, she dreamed of home, including the sweet laddu my mother made with chickpea flour, the desserts and almonds that we ate on feast days. But those memories have faded over the years, and the hopes the children now share with one another are not for sweeter food, but for sweeter dreams. Or even any dreams at all. Fatima’s grandmother once told her that to have no dreams is the worst fate of all, and so the children compete every morning by making up fantastical sleep adventures from the night before.

Those false dreams were truly all they had to live on until Iqbal arrived. Iqbal, who was two years older than Fatima with eyes sweet and deep and [that] weren’t afraid.

It is Iqbal who crushes those pretend dreams as well as the children’s hopes that their debts will indeed someday be erased. But he replaces those fantasies with a real hope – that one day they will run away from the factory. A dream that Iqbal swears he will bring to fruition. And that may actually sustain them far better than that forgotten sweet laddu.
Posted by Shelley Workinger at 7:16 AM