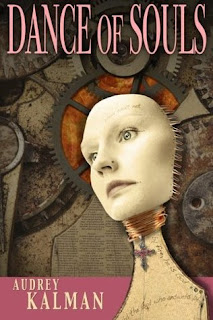 Taste Will Tell
by Audrey Kalman

I’ve always loved both writing and cooking. In fact, I once wrote and published a cookbook. That was back in the days when “self-publishing” meant photocopying and comb binding the pages.

The combination of books and food—or literature and gustatory experiences, if you want to be fancy about it—is a natural one, and food seems to work its way into my writing often. A scene from my novel Dance of Souls brings two characters together for a home-cooked meal:

Roxanna had cooked him pollo mole—her mother’s recipe, with nothing from a jar or can. She had toasted and ground the nuts herself and softened the fruit (although she had used the blender and not the metate her mother would have used), hoping to demonstrate to Mr. Candine that in some dishes, albeit not in the case of coffee, ample emotion could compensate for a less-than-scientific approach. He had even helped her in the kitchen as they drank Corona straight from the bottle—another concession by Mr. Candine to his steadily slipping standards. Indeed, the dish had been a great success and they had both eaten more than was strictly good for them.

You could hardly find two more mismatched lovers; their attitudes toward food reveal their differences. Roxanna, the daughter of Guatemalan immigrants, is searching for her place in suburban California and has latched onto a fundamentalist church as a way to stay connected to her past. Cooking is part of her heritage and childhood, something she does as naturally as breathing.

Mr. Candine is a displaced mid-westerner, a religious fanatic with delusions of grandeur and some very peculiar ideas about the world. He also teaches middle-school science. His fussy precision—really just a way for him to maintain the illusion of control—makes itself evident when he cooks and eats. (The mention of coffee is a reference to the scientific exactitude he brings to the task of brewing his morning joe.)  It’s a great testament to Roxanna’s feminine wiles that she has gotten him to loosen up enough to drink beer while helping her cook, and straight from the bottle, no less!

How a character relates to food, cooking, and eating reveals a great deal about who they are and their motivations. I wonder what it reveals about authors…

Thanks for stopping by to share your food for thought, Audrey! 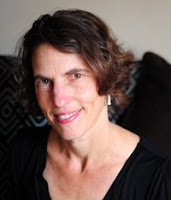 You can find Audrey here:


Audrey has been writing since she was old enough to hold a pen and has been editing professionally for more than twenty-five years. Her novel What Remains Unsaid is scheduled for publication in 2016 by Sand Hill Review Press. Her previous novel, Dance of Souls, appeared in 2011. Many online and print journals have published her short fiction and poetry. She lives in northern California with her husband, two sons, and two cats, and is at work on another novel.

Posted by Shelley Workinger at 10:40 AM