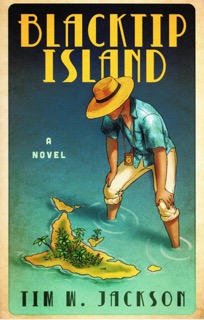 Blacktip Island, the smallest of the Tiperon Islands, lies east of Flor de Caña and south of La Imaginatión in the Caribbean Sea. Settled by a succession of indigenous Tiperon people, European ne’er-do-wells, escaped slaves, and deserters from a half-dozen armies, its cuisine is an international mix cooked with a Caribbean twist.

Tuna kebabs, turtle stew, and snapper baked in rum-mashed bananas are standard fare, but conch is the island’s staple. The palm-sized mollusk is chopped and served raw in salads, as ceviche, and cooked in chowders, fritters and burgers. Meals are laced with the island’s ghost chili peppers and served with cassava, mangoes, callaloo, fried plantains or black beans.

“It’s simple food, but the flavors are complicated, curried lobster,” said Mallory LaTrode. “That’s Blacktip. ‘Normal’ never took root here. Nothing, and no one, is what you expect.”

It’s to this backwater island of 100 residents that inadvertent embezzler Blake Calloway stumbles, a step ahead of the Feds and desperate to start fresh as an anonymous divemaster in paradise. But he quickly discovers “tropics” doesn’t mean “paradise,” and rookie boat hands stick out like a reef at low tide.

His fellow residents are as quirky as their cuisine: a landlord who swears he’s Fletcher Christian reincarnated, a boss who likes fish better than people, a sloshed resort manager with a sex-crazed wife, a possibly ax-murdering neighbor, and a girlfriend who just might turn Blake in for the reward money. Blake steers a ragged course between them, trying to straighten out the mess he’s made before the cops can track him down and haul him away.

Where does he find comfort? In the island’s food, of course. And with fellow expat Mallory, who feeds him crunchy whelk fritters and mango, red beans with rice cooked in coconut water, and mackerel rundown: fish stewed in coconut milk and curry. And it’s during these meals, bit by bit, Blake realizes Mal may not be who she says she is, and has more secrets than a CIA mole at a liars’ convention.

Blacktip Island, due out September 1, is a humorous romp across a tropical island for anyone who’s ever dreamed of trading the rat race for Margaritaville.

Thanks for stopping by to share your food for thought, Tim!

You can find Tim here:

Tim W. Jackson lives on a small Caribbean island where he works as a scuba instructor by day and writes fiction at night. He wishes that was half as interesting as it sounds. Or even a quarter...

Tim is the author of Mangrove Underground and The Blacktip Times humor blog. His Tales From Blacktip Island short stories have been published in numerous literary journals. He’s currently concocting his second Blacktip Island novel, The Secret of Rosalita Flats, and has never embezzled anything. That he’ll admit to. And the fish ain’t talking.
Posted by Shelley Workinger at 9:58 PM