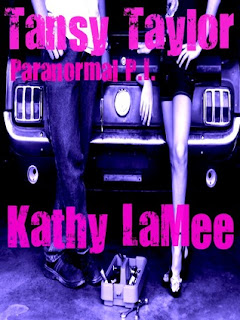 I’m a total food junkie, or foodie, so there is always food in my books. We use food as a culture in so many ways, so it’s only natural to draw that into stories. I’ll be honest - it’s been a few years since I wrote the first Tansy - so I was struggling to remember all of the foodie bits in the book. So what does one do when they can’t remember? They open their Kindle Cloud Reader and use the trusty Cntrl+F to find the food! Wow, was there a lot of food!

First, a little insight into Tansy’s story. She’s a twenty-something soul who is sort of lost, wandering from bad love interest to bad love interest and working at a psychic hotline call center. She really has an ethical problem with her job and the way she is expected to lead customers on, so when she gets fired for being too helpful to a caller, she isn’t surprised. She ends up meeting the caller, Callie, and begins the quest to help figure out what has happened to Callie’s missing boyfriend Buster, a shady car dealer’s wash bay guy. She ends up discovering a lot about her newly discovered talent - that she not only can do some aura reading but can actually see and talk with the recently departed as she unravels the facts behind Buster’s disappearance.

Tansy has food around her ALL the time. Her roommate and best friend is a designer, who also happens to work magic with pastries and other treats in the kitchen. Often, the sweet sultry smell of baked goods and freshly made coffee entices Tansy to get on with her day, no matter the trouble she’s gotten into the night before!  Her love of baked goods doesn’t stop there though - she digs into scones and muffins several times in Dixie’s Diner, where her client Callie works as a waitress. Speaking of diner food, nothing makes Tansy or me happier than walking into a diner. My stomach rumbles when I hear the jingle of the little bell on the door (they all have them, right??) and it induces a Pavlovian response that makes my mouth wonder at the treats in store. I discovered in my early thirties that I absolutely love Reuben sandwiches; I mean, who would think that corned beef, Swiss cheese, sauerkraut and a thick slather of Thousand Island dressing on rye would be so unbelievably tasty? On their own I actually do not like any of these foods, but put them together and crazy magic happens. I counted six times in Tansy’s first story that the Reuben is either mentioned or consumed, usually with a bag of locally made potato chips. Perfection on a plate!

As Tansy works her case to discover what has happened to Buster and grapples with the fact that she can talk to dead people, she converses and muses often, all while enjoying something tasty at the diner, her kitchen, or a picnic in the park. I think that food is a natural binder- it’s there when we have conversations over dinner, or meet up for drinks. Food can also be a way to show someone affection - I mean, who doesn’t love to have someone special bring them a tasty treat or a cup of their favorite coffee drink? What we eat or the type of drink we order says a lot about a person, in my opinion, and I find it a great way to bring characters to life in the stories we tell.

Thanks for stopping by to share your food for thought, Kathy!

You can find Kathy here:

Books on Amazon
Posted by Shelley Workinger at 12:41 PM