FOODFIC: Please Welcome Tony Macaulay, Author of All Growed Up 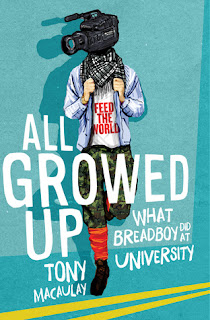 In my memoir All Growed Up, it’s 1982 and I leave my hometown of Belfast, Northern Ireland for the first time in my life to begin a ‘coming of age’ adventure of learning as an eighteen year old student at university. One particular chapter of the book serves up the flavours of traditional Irish food. In Go Wild in the Country I tell the story of my first visit to my new girlfriend’s house in a small rural village in the middle of Northern Ireland. I meet the lovely Lesley’s mother who is very warm, friendly and hospitable and more importantly, a legend in her own kitchen. However, like every good Irish Mammy when it comes to offering the best of food to a guest, she cannot take no for an answer. The repercussions are most embarrassing!

There are two main Irish foodstuffs involved in this unfortunate incident, one sweet and one savoury. The sweets are the typical fare baked in every self-respecting kitchen in Northern Ireland and produced alongside a nice cup of tea on all occasions. A ‘pavlova’ is an egg and sugar based dish, a monumental meringue smothered in fresh cream. Meanwhile ‘caramel squares’ are biscuit based square shaped cookies with a delightful layer of caramel and chocolate on top. Here’s what happened when I entered my girlfriend’s mother’s kitchen:

She placed one of her Himalayan pavlovas in the middle of the table and my mouth watered instantly. Then she surrounded the pavlova with a series of smaller plates containing geometrically perfect caramel squares, freshly baked fruit scones with butter and jam and a plate of chocolate biscuits from a good tin…

The supply of food continued all day long:

‘Have another piece of pavlova,’ said Mummy
‘No, thank you, I think I’m full up now,’ I replied.
Silence.
‘Och sure go on, you would, you could, you should’ said Mummy.
‘Okay, thanks, you’ve persuaded me, please,’ I responded with the utmost courtesy.
‘Now, have another scone, Tony,’ said Mummy.
‘Oh no, thank you, really I couldn’t, I’m full up now. It’s all so lovely, thank you.’
‘Och, none of that, you will, you can, you should, sure you’re a growing boy,’ said Mummy, clearly not expecting ‘No’ for an answer.
All of this food was delicious and I enjoyed being spoilt in this way, but I wondered if I would be permitted to stop eating before all the plates were empty.

The savoury dish that features in this chapter of my book is the iconic Northern Ireland breakfast, known locally as an Ulster Fry. As the name suggests this is a hot fried breakfast, not known for its health benefits. In fact an Ulster Fry is also known locally as ‘a heart attack on a plate.’ The dish consists of fried eggs, sausages, bacon, black pudding and mushrooms. An essential element of the Ulster Fry is the addition of two distinctive Irish breads, soda and potato farls, fried of course. This large breakfast plate is usually completed with a dollop of tomato ketchup or HP Brown Sauce. Normally, it’s a very satisfying breakfast on the weekend, but on this occasion it was simply too much to handle!

I sat down amid the activity and cooking and frying smells but all of a sudden I began to feel sick. I was surrounded by the makings of the perfect Ulster Fry, a massive feast of meat and enough fried bread to empty a shelf in the Ormo Mini Shop but probably due to my over indulgences the day before a wave of nausea began to overwhelm me.
‘I feel a bit sick,’ I whispered to Lesley, who looked most concerned.
‘You have to eat Mummy’s fry, she’s been preparing for it all week,’ she whispered back, our conversation masked only by the sudden sizzling of mushrooms being added to the frying pan.
I attempted to take deep breaths to subdue the nausea but every deep inhalation was accompanied by the odour of fried meat and mushrooms and by this stage of my condition the smell was sickening rather than appetising. Lesley observed me closely, clearly aware of the potential disaster unfolding in her own kitchen. She could see that my face had turned a whiter shade of pale and realised that an intervention was going to be necessary.
‘Tony’s not feeling well,’ said Lesley, much to my relief.
Mummy looked over her bifocals with a mixture of shock and disappointment, as the frying fat spat at me from beneath the eggs.
‘Och, sure you’re alright now. You just need a good fry and you’ll be fine.’
‘Sorry, I think I need to lie down,’ I confessed, ‘and then I’ll be okay thanks for a fry, please, if that‘s ok.’
Mummy, Daddy and Lesley cast glances at each other from various workstations across the kitchen. I was embarrassed. To fart explosively at the kitchen table would not have been worse. Mummy looked hurt, as if her cooking was making me sick and Lesley looked concerned about Mummy and Daddy went outside for a smoke.
‘Sure, you would, you could, you should just try a wee plate,’ persisted Mummy and she proceeded to set down a plate of sausage, bacon and egg in front of me.

Of course, you have to read the book to find out what happened next, but I’ll give you a clue – everything went in the wrong direction!

Thanks for stopping by to share your food for thought, Tony!

Books on Amazon
Posted by Shelley Workinger at 7:10 AM