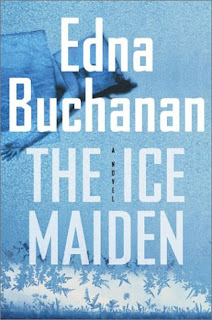 I like crime reporter Britt Montero. Yes, I like her for all the usual reasons – she’s smart, tough, relatable and all that.

But I also like that she can feel sympathy for a perp, even when she didn’t expect to; she learns the story of his childhood trauma and can see shades of gray.

And I like that she prefers cocktails to beer. Really, how can a Coors Light compete with rum, coconut cream, pineapple, and orange juice?

I very much like that she finds flirting long-distance much easier than in person. (And rightly so – when phone-romance-guy shows up at her door, her greeting is far from sexy.)

And I most like that she leaves her conditioner on for 10 minutes versus the recommended 2. I do that sometimes, too, trying to believe that gives the product a little extra oomph, even though she and I both know it doesn’t. See, I find that it’s good to funnel all of your irrational thinking into meaningless outlets like that, so that you stay sharp when it actually counts. ;)

There’s just one thing about Britt I don’t like – she doesn’t order the commander-in-chief dinner at La Esquina de Tejas, her favorite Miami restaurant. To be fair, she’s there to meet with two Cold Case squad detectives and discuss the heinous unsolved rape/murder of two local teenagers – not the kind of conversation that allows one to savor a meal. Instead, Britt just drinks Cuban espresso, which I both love and feel is an appropriately sober choice.

Okay, so it seems like Britt’ll stay in my good graces. Especially since she does take the time to tell us what comprises the special: pollo asado, moros, maduros, flan y café. Now at least when I make it there myself, my appetite will be adequately primed. ;)
Posted by Shelley Workinger at 12:53 PM