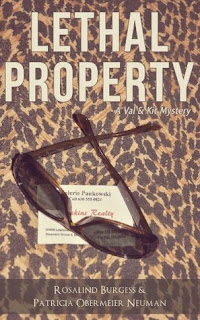 Food is important to Kit. Not really the eating of it, but more the preparation, the cooking, and the reviews from her adoring diners. Her BFF, Val, is a regular recipient of Kit’s fantastic cuisine, but left to her own devices, she is just as happy with a bowl of Cheerios while watching TV in bed.

“Got time for a breakfast taco, Val?” Kit asked.
“With chorizo sausage?”
“Naturally.”

In Lethal Property a serial killer is on the loose in Downers Grove. It begins with Val, a Realtor, showing a house to a mysterious man who seems to have more than the purchase of real estate on his mind. Even more alarming is the fact that the string of murders that ensue seem to implicate Val and threaten her safety.

Not content with waiting for the police to solve the case, Val and Kit pursue their own list of suspects, which brings them to a local Greek restaurant. At first glance, this establishment does not even come close to Kit’s impossibly high epicurean standards, but she’s willing to give it a try.

Since the restaurant smelled fishy and the plastic menus were covered in some sort of greasy substance that displayed a million fingerprints, I was amazed when Kit agreed to let Giorgos pick something for us to actually eat. I guess his good looks outweighed the poorly maintained restaurant.
“It’s called papoutsakia,” he said.
“Eggplant stuffed with ground beef, cheese, and . . . and . . . let me guess . . .” Kit snapped her fingers.
“Béchamel sauce,” Giorgos supplied the last ingredient.

The murders continue at a gruesome pace, and Kit insists that Val move in with her and her husband, Larry. To further secure Val’s safety, Kit also invites her neighbor’s dog, Roscoe, a one hundred pound Rottweiler, to stay with them. Unfortunately, Val’s fear of Roscoe is almost on par with her fear of the killer.

“These look heavenly.” I took a seat at the counter and eyed the plate of waffles before me.
“Sorry, Val. Those are for Roscoe. But I can easily make another batch if you—”
“Roscoe? Are you kidding me? And where is the hound of the Baskervilles, anyway?”
“He likes to walk before breakfast, so Larry’s taking him around the block. And he doesn’t like syrup on his waffles.”
“Larry or Roscoe?”
“Roscoe, of course, and really, I can make some more if you—”
“Kit, you realize he’s a dog, right?”
“Exactly. It wouldn’t be natural to put syrup on waffles—”
“Oh, for crying out loud. Just let me get some coffee—unless, of course, Roscoe doesn’t approve of coffee before walking.”

Like everything she does, Kit is an elegant cook. But she’s also highly practical.

She took a sip of her own wine and then put on some rather chic black oven mitts. Next, she removed a large cast-iron dish from the oven and placed it on the counter.
“Wow,” I said. One of the best arguments for staying at Kit’s was the fabulous food I was about to enjoy. “That’s some dish.”
“I know. Le Creuset,” she announced. “On sale this week at Sur La Table. You should stock up, Val.”
“Yeah, right, because my Cheerios would taste so much better. What I meant, dummy, was what’s inside it.”
“Veal cannelloni.”
“One of my favorites. When do we eat? I’m starving.”
“Unfortunately, it’s not for you, Valley Girl. We’re taking it over to Wendell Fullerton’s.”
“Huh?” I felt disappointed.

It doesn’t seem right to Kit’s BFF that Wendell Fullerton should be high on the suspect list and get the veal cannelloni. But many fabulous dishes, and more than a few margaritas later, the case is solved and Val can return home. To her Cheerios.

Thanks for stopping by to share your food for thought, Patty and Roz!

Posted by Shelley Workinger at 9:36 PM