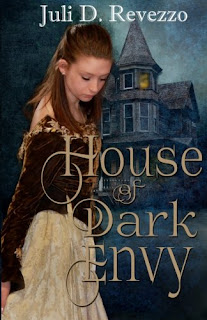 In  my latest novel, House of Dark Envy, my heroine Sarahjane is a young painter so when she has a chance to study with a painting master, she jumps at the chance.

She is surprised to learn, however, that though she stays in the master’s house, she’s also left with the run of it, while he goes off gallivanting around town. For a young lady in the 19th century, this was  a strange things she deals with, mostly young ladies were followed around by mothers and chaperones and not allowed such freedom. Running of the house of course means dinners so she pretty much does what she wants in terms of meals, as far as the markets allowed. This was, of course, before you could run off to the store to buy any ole thing, regardless of whether it was in season or not.

Aside from her meals, she drinks a lot of tea. For most people, tea is the first thing they think of, when they think of Victorian Britain, and Sarahjane’s daily repast was no different. Though she never frequents a tea room, at least during her educational stay in York, she does consume the popular drink with a few little dainty sandwiches or cakes, if she’s hungry enough!

It’s an interesting tradition and one that many partake of today, even in the United States. My grandmother used to have her tea every day like clockwork, and I can say I myself have gone to a high tea.

Okay, okay, I wasn’t all decked out in Victorian finery but it happened! I have the pictures to prove it. :) In looking into what-all else she might have, the Britons ate differently than we Americans. There’s sausage and ham—and tomatoes, of all things, to comprise their breakfasts. Which sounds a lot more like lunch to me. More often than not, I can see her just having a biscuit and a bit of tea. Something she can eat with one hand, while painting with the other. :)


Thanks for stopping by to share your food for thought, Juli!

You can find Juli here:


Synopsis of House of Dark Envy:

1888: When Sarahjane attends Lady Morville’s costume party, she never expects to learn her old beau Felix Gryffith is under the illustrious woman’s patronage and stands on the cusp of making a world-changing discovery. Felix, whose lies disgraced her in the eyes of the London elite by labeling her a flirt.

Felix’s love for Sarahjane has never wavered, despite the scandal that forced them apart. He’s desperate to tell her the truth, if he can convince her to listen.

Fate lurked in the shadows that night, years ago. Has it returned to grant Sarahjane and Felix their wishes, or terrorize them?

Posted by Shelley Workinger at 9:12 PM