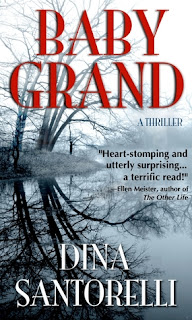 Mob storylines usually involve a smorgasbord of Italian food—pasta, sauce, bread, lots of bread, and all kinds of pastries. In my mind’s eye, when I think of books and movies about organized crime, I picture bulky, menacing-looking guys stirring big pots of sauce and probably the most memorable line from The Godfather: “Leave the gun. Take the cannoli.”

In Baby Grand, the first book in my thriller trilogy, a bunch of mob guys are living temporarily in the home of a man named Don Bailino, who has just orchestrated the kidnapping of the baby daughter of New York Governor Phillip Grand. Bailino has also abducted a down-and-out writer named Jamie Carter whom he then forces to care for the child while he and the others work to delay the execution of mobster Gino Cataldi, who is on death row.

Rather than have the usual smells of tomato sauce, basil, and oregano permeate Bailino’s home or have the mobsters hang out in front of a pork store, a la The Sopranos, or make frequent visits to a local Italian bakery, I keep the food spare—and, overall, quite healthy. Cheerios (for the baby, perhaps). Apples. Grapes.

In one scene, he bakes brownies—carefully using a knife to coat the top of a brownie with frosting, an image that makes him seem more like Martha Stewart than a mob guy. I did this to depict the complexity of Bailino, a guy who uses knives to kill but also to bake. A guy who can be as sweet as he is ruthless. A man who is meticulous about his work, be it in the kitchen or in a back alley.

Bailino eventually presents those brownies to Jamie Carter who is upstairs in his bedroom. What will Jamie do? And where is the baby?

I could tell you what happens next, but I’d have to kill you.

Thanks for stopping by to share your food for thought, Dina!

You can find Dina here:

Posted by Shelley Workinger at 7:53 AM