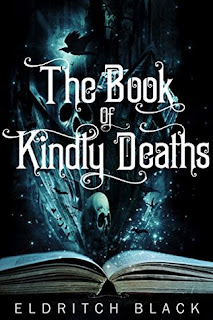 Greetings, my name is Horasmythe Spindlecleft, also known as the gourmet of gourmets. If you've ever dined in my modest little Inn "The Fat Cobblefoot", situated on the side of the Foggypeake mountains, you'll be well aware of my extensive knowledge of food and of the finer things in life.
By now you've no doubt heard of my infamous twice-fried bat wings and hair of Hackthin tart, creations of exquisite beauty, though I say so myself. Not to mention my highly regarded Doormouse eye on toadstall and very-berry-sherry sauce.
So it's with great pride that I can announce I've been appointed chief scribbler of food reviews for the Grimwytch Gazette. Below are the first of many pearls of wisdom concerning places where weary travelers may sip and gorge upon unearthly delights. Outside of The Fat Cobblefoot, of course. And of places that should be be avoided like Fungal-throat plague.

The Malady Inn
A Fairly good stock of Old Catwhist, shame about the clientele.

The Malady Inn is a worn old building on the side of the Eastern Blackwood Road. Inside is a cosy, dingy room and its fairly affable landlord, Mr. Barrow. His bar is well stocked for the most part, although not to the scale of The Fat Cobblefoot.
I chose a dish of sainted duck, goat-foot soup and a pint of Old Bramble's Tipsy. It was an adequate meal until a table of Babbleslithers sat beside me and ruined the meagre ambience. Upon finishing their food, one of the more portly among them threw up his entire course through his left eye.
An unpleasant, vulgar end to a mediocre, but serviceable evening.

I'd once visited this once-quaint little town in my youth. Gone were the cozy little houses and groves of apple trees, and in their place, ash, charcoal, rot and ruin.
There was nowhere to eat on account of the whole town being burnt to the ground and on top of that I had to deal with a Hoardspike. She managed to consume two of my servants right in front of me and it was only upon offering her my vast collection of dried trotters that she let me go.
A once enchanted town, now a foul, dismal place.

I'd heard many tales of Uncle Horace's pies. It was with great caution that I entered the hodgepodge Greshtaat District. That caution was well placed. A revolting, stinking pile of bricks and dribbles.

Upon finding the Pie Stand, manned by the bald, sweating wreck of Uncle Horace himself, I purchased a pie. It only took two mouthfuls before I was forced to spit it out, such was its monstrous blandness. Unfortunately, one of the maggots used to garnish the pie struck Horace in the face as I expelled my food, bringing forth the rancor of the Eiderstaarks. We fled and escaped, asides from one servant who I last saw being dragged into a ramshackle building.

Yes, the Kishspick stew is indeed delicious, were it not ruined by the lowlife teeming in from the boats. I thrashed two with my cane for their sheer ugliness, before a vulgar crowd formed and chased me, hacking to death my remaining servants. I only just escaped by the skin of my back teeth and bid a hasty retreat.

The Twisted Entrails Inn*
Two putrid turnips for the food, a rotten onion peel for the atmosphere.

This public house has somehow stood in the heart of the Midnight City for centuries. Upon entering, I was almost certain the place would fall down around my ears.
The ambience could be described as raw and *bloody*. A dense crowd of locals, most as thick as treacle, stood swaying at the bar as broken broken refrains from a derelict piano filled the sour air. I made the mistake of ordering the soup of the day, something that appeared to be a broth of grease containing chunks of indeterminate liver. And thumb. My soup was as cold as a serpent's tooth on a winter's evening. I sent it back at once and called the owner over and–**

* Please note the Grimwitch Gazette found this last review spattered with blood and sitting below a table in The Twisted Entrails Inn.
** Of Mr. Spindlecleft, there was no sign.


Thanks for stopping by to share your food for thought, Eldritch! 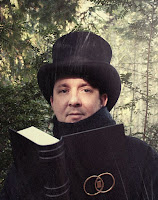 You can find Eldritch here:

Books on Amazon
Posted by Shelley Workinger at 7:43 AM