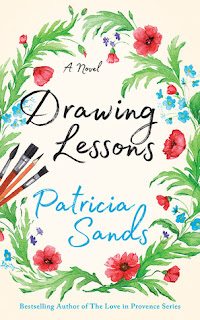 Heartbreak is never easy. Arianna Papadopoulos-Miller arrives, from Toronto, in the Alpilles area of the south of France on a quest to rediscover the artist she once was and move forward with her life.

She is welcomed on the terrace of the 200-year-old mas (farmhouse) where she will spend two weeks with 7 other artists. From that moment, gastronomy becomes a feature of her stay. But, hey … alors … it’s France! 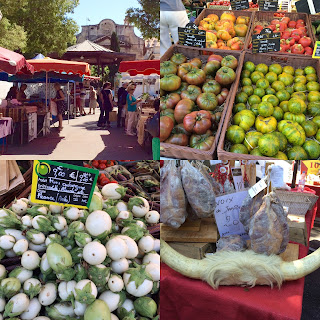 Foie gras on toasted rounds of baguette and local olives accompany the chilled champagne, poured in slender hand-blown glass flutes. A toast is made to the beginning of an exciting two weeks of drawing and painting … and other unimagined experiences.

And so it begins.

“La grande charcuterie!” Maurice announced as three large slabs of olivewood were proudly presented by the kitchen staff. Each bore a colorful display of meats.

Maurice gave a guided tour of each artistically arranged platter. “We have thinly sliced prosciutto as well as jambon cru . . . local uncured ham that will melt in your mouth. Here we have our very special saucisson d’Arles, native to our area in particular. It’s a dry sausage that used to be made a century ago from—don’t gasp, please—donkey meat.”

In spite of themselves, there was a slight gasp.

“It is nowadays made of beef and pork fat with some garlic and black pepper. Magnifique! Only certain local charcutiers make it—c’est authentique! And finally, there are grilled lamb chops, seasoned to perfection. We are famous for lamb in Provence. You will see why!”
His hand moved on to the end of the platter, and his level of enthuthsiasm increased even more. “Pâté maison, la recette de mon arrière-grand- mère! Very smooth. It’s made with chicken livers, lemon, onion, and herbs de Provence. Plus”—with this, he raised his fingers to his lips, as if sharing a secret—“what makes hers special is . . . a touch of fromage de Neufchâtel.”

He nodded conspiratorially, the gleam in his eye never fading as he continued. “And also her even more famous pâté en croute. It’s a coarse and rich terrine of mixed ground meats with peppercorns and pistachios. After being cooked in aspic, it is wrapped in a rich, buttery crust, coated inside with lard. C’est vraiment extraordinaire!”

“And ever so fattening!” Bertram interjected.

Maurice responded with humor. “Don’t even think about calories or cholesterol when you eat in France. Simply enjoy! A little bit never hurt anyone! Even too much on certain days never hurt anyone. We only live once!”

“Can you tell my husband is a true ‘foodie’?” Juliette interjected with a grin.

Maurice bowed with an extravagant flourish as applause reverberated around the table. “Champagne goes very well with this meal, if you care to continue, or we have a fine Châteauneuf-du-Pape red—and, of course, always there is beer for those who prefer.”

After he slipped his arm around Juliette’s waist, they wished everyone in unison, “Bon appétit!”

During the meal, Maurice answered questions about the difference between a boucher, a butcher who sells raw meat, and a true charcutier, someone who prepares the foods they were eating.

“Of course,” he explained, “you will discover we can thank the Ancient Romans for many of our traditions.”

And that was just the beginning … from breakfasts of warm, buttery croissant, pain au chocolat, pain aux raisins, farm fresh eggs and fruit straight from the orchard through exquisite multi-course meals (or sometimes simple but delicious baguette sandwiches) ... and then there is a simple green salad followed by cheese. Lots of cheese choices! The grand finale consists of luscious desserts of crème brulée, profiteroles, crêpes, gateaux, tarte tatin, tarte au citron … Are you full yet? You may think I’m exaggerating, mais non! And somehow over there, it all works as hours are spent savouring and appreciating each morsel. Bon appétit! 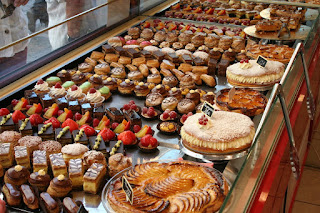 Along with the food, Drawing Lessons is a story about friendship, art, discovery and hope … set amidst the beauty of Arles and the unique Camargue, in the Bouches-du-Rhône area of the south of France.


Thanks for stopping by to share your food for thought, Patricia!

You can find Patricia here:

Books on Amazon
Posted by Shelley Workinger at 11:50 AM