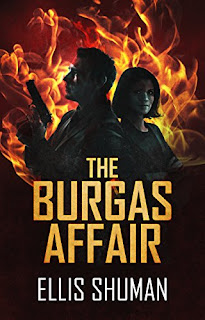 When Detective Boyko Stanchev of the Bulgarian State Agency for National Security sits down for lunch at a roadside cafe, he is furious that his partner is an inexperienced data analyst from Israel. Ayala Navon has just flown in from Tel Aviv to join the investigation of a bombing at Burgas Airport which took the lives of five Israelis and their Bulgarian bus driver. Ayala has never previously been to Bulgaria and Boyko feels she will interfere with his work on the case.

The waiter brings their lunch:

There is the ubiquitous shopska salad—finely cut wedges of tomatoes and cucumbers topped with grated salty white cheese. Next to it were small ceramic bowls of potato salad and the so-called Russian salad, which was nearly the same, except for the addition of carrots and peas. A colorful tomato salad and one made from peppers were also quite appealing; they were served on traditional Bulgarian plates. Off to the side was a bowl of yogurt spotted with drops of green.

“Snezhanka salata,” Ayala said, dipping in her spoon to help herself.

“How do you know its name?”

“It’s because,” she began, but then she shrugged, smiling to herself. She recalled the occasions during her childhood when her father had asked to include Bulgarian dishes in their meals, a request stated so frequently that her mother had given in to his tastes, despite their being so different from the cuisine with which she was familiar.

“Because?” he asked, waiting for an answer.

“Was it part of your research for coming to Bulgaria? Is this what the Mossad teaches you—the names of local food so that you can fit right in with the population and not stick out?”

When there is no progress in the joint Bulgarian-Israeli investigation of the bombing, Ayala is reassigned to a desk job in Tel Aviv. To her surprise, Boyko arrives in Israel. “Detective Stanchev will serve as liaison to our intelligence-gathering efforts. The Bulgarians, like us, have a very keen interest in getting to the bottom of the Burgas bombing,” her boss informs her. And then he asks Ayala to arrange home hospitality for their Bulgarian guest. Reluctantly, Ayala brings Boyko to her parents’ home for a home-cooked Shabbat meal.

After her father recites the traditional blessing over the wine, Ayala blesses the challah and serves a piece of the braided bread to Boyko. Ayala’s mother rose from the table to serve the soup. She ladled out four bowls and placed the first one in front of their guest:

“Chicken soup, with a bit of lemon squeezed in, like the Bulgarian custom.”

The Burgas Affair, a crime fiction thriller set in both Bulgaria and Israel, is based on a very real terrorist attack. On July 18, 2012, a deadly explosive rocked a tourist bus at Burgas Airport, killing five Israelis and their Bulgarian bus driver. The terrorists responsible for this murderous attack have never been brought to justice.

Teamed up together, Boyko and Ayala should be conducting a routine investigation, but shadows of the past keep interfering.

Boyko’s interactions with a crime boss pursuing a vendetta against him threaten to throw him off track. Ayala’s pursuit of the terrorists and their accomplices brings up painful memories of a family tragedy.

Boyko and Ayala form a shaky alliance, one that evolves into growing cooperation and affection as they desperately race against time to uncover who was behind the Burgas bombing.

Suspense and procedural detective work aside, The Burgas Affair also portrays the cultural differences, and similarities, between Bulgaria and Israel. Unlike many other novels in the genre, the characters in the book are portrayed as real, flawed individuals. Despite the urgency of their investigation, they still must take breaks to eat. They go to sleep at night and yes, they even need to use the rest room from time to time as well.

When Boyko joins Ayala in Tel Aviv, she regards him with a curious look in her eyes:

Here he was—the officer with whom she had spent many hours driving around the Bulgarian countryside as they investigated various aspects of the case. They had argued, nearly bickering as they discussed suspects and leads. They had joked; they had laughed. They had eaten together, drinking rakia as he told her tales of his country. He had charmed her unexpectedly to the point that she had seriously considered inviting him into her hotel room. Here he was, present in Tel Aviv, again assigned to work with her. She didn’t know exactly how she would handle this unforeseen change in circumstances.

“Shall we get started?” Boyko said, a wide smile on his face.

Thanks for stopping by to share your food for thought, Ellis! 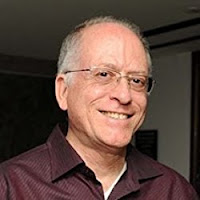 You can find Ellis here:

Ellis Shuman is an American-born, Israeli author, travel writer, and book reviewer. He served in the Israeli army; was a founding member of a kibbutz; and has worked in the hotel industry and online marketing. His writing has appeared in The Times of Israel, The Huffington Post, The Jerusalem Post, The Oslo Times, and Israel Insider. He is the author of The Virtual Kibbutz and Valley of Thracians. Shuman lived for two years in Sofia, Bulgaria, and today resides with his wife, children, and grandchildren on Moshav Neve Ilan, outside Jerusalem.
Posted by Shelley Workinger at 12:11 PM