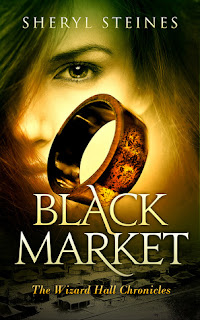 Realism, Make Believe and Deciding What They’ll Eat for Dinner

As a writer, the joy of writing Urban Fantasy is in creating new worlds. While we can make things up for the fun of it, the real success in making the world believable is thinking through each detail no matter how mundane, whether it’s the clothing the characters wear, the language they speak or the food they eat.

I had very clear goals for my Wizard Hall Chronicles series. I was after realism, to have the reader suspend their disbelief and accept the world with magic as fact, at least for an afternoon.

In Black Market, Annie Pearce is a wizard guard, a magical police officer. Her career offers some familiarity in the magical world, as there’s a level of government and law and order. However, she fights magical crimes, chases demons, vampires, and evil wizards; mixes potions and uses crystals to scry for suspects and discover magical trace evidence.

To drive the realism home, Annie Pearce and her fellow wizard guards dress in modern fashion, (unless attending traditional magical functions), live in non-magical neighborhoods, speak the languages of the countries in which they live, roam through Chicago’s landmarks and yes, they eat what we eat. Annie grills steaks, eats salad, drinks coffee and eats greasy sausage sandwiches from the restaurant around the block.

While I sprinkle traditional wizard elements like clothing, magical history, spells and potions throughout my series, I made a conscious choice about food when I imagined what the world would be like if magic existed. It’s no different than the choice JK Rowling made in Harry Potter when characters drink pumpkin juice and butterbeer, and eat chocolate frogs that hop from the package. In Star Wars they drink blue bantha milk and in Star Trek, the food from the replicator is colorful, irregular blobs of foam rubber. These creators wanted the reader and viewer to believe their make believe worlds were completely separate from the “real” world.

I however, want the magical and non-magical worlds to have a delicate co-existence, dependent on each other.  One of the recurring themes in my series is the fear of exposure and the necessity to keep magic hidden. To do that my characters blend in, and have become in so many ways, just like their non-magical neighbors, only they have amazing, magical gifts.

So yes, my food choices may seem standard and boring, however, in my defense, they’re crafted and conjured by elves, fairies and witches, sometimes by scratch and sometimes with magic.

Thanks for stopping by to share your food for thought, Sheryl!

You can find Sheryl here:

As a self-proclaimed television junkie and an avid reader, Sheryl Steines writes what she loves. From the character/relationship story from one of her writing inspirations (Judy Blume), to the fantastical world of magic and mayhem in another inspiration (J.K. Rowling), to the strong female character of Buffy the Vampire Slayer. Sheryl uses the world of magic and mystery, mashed with a bit of detective work, to weave a story of women who face challenges, overcoming them with dignity and honesty, using her own challenges as inspiration.

Sheryl has written two books in her Wizard Hall Chronicles series (The Day of First Sun and Black Market) and working on a new series, The Empaths (Gracie Madison Feels the World). Both series introduce the reader to young women battling demons of the supernatural kind and the personal kind, each fighting to find their way.

Sheryl Steines has been writing since she was seven years old, since she picked up her first Nancy Drew novel and hasn’t stopped. When she’s not reading or writing, she can be found tooling around in her convertible, supporting causes and raising her kids, dealing with extra ordinary challenges.

Posted by Shelley Workinger at 12:46 PM