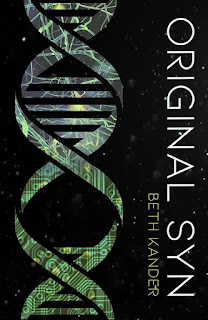 Original Syn is a dystopian epic where our world has become totally unrecognizable… or maybe not so much, if we just squint a little. Fifty years after an epic event called the Singularity, the entire world is divided into just two categories: The powerful, age-defying Syns ("synthetic citizens," human-computer hybrids with extraordinary enhancements) and the dying, oppressed Originals (those who did not merge their bodies with machines). A decades-long war between Original and Syn is almost at an end, because after an attack on their reproductive systems, the Originals are on the verge of extinction.

But then Ere, one of the world’s last teenage Originals, meets a beautiful, powerful Syn girl called Ever, and suddenly questions everything he’s ever been told about his lifelong enemies. Meanwhile Ever realizes there’s a dark side to the world she’s always taken for granted. And unbeknownst to either of these star-crossed lovers, there’s a revolution at hand…

Okay—but what are they eating?!

In the Originals’ world, food isn’t glamorous. They eat canned goods and whatever they can find and forage. But gathering water and preparing and eating food brings them together, uniting them even when the meals themselves are nothing special.

At the opposite end of the spectrum, the Syns can eat anything they like. Food, as with everything else, is something they can stockpile and perfect and enjoy… but as with so many other things, having hoarded all of the resources doesn’t always turn to joyful ends. With the ability to eat anything at all, selective withholding of food or manipulation of menus becomes a tool of domestic warfare for Syns at odds with one another. Take Marilyn Hess, wife of the most powerful man of the Syn world, ageless and privileged but constantly feeling victimized, overlooked, and powerless. She’s always at odds with both her husband, Dr. Felix Hess, and her daughter, Ever (who has been seventeen for fifty years, so you can imagine the drama). Marilyn can’t go up against her husband—at least, not yet. But she can find small ways to torture her daughter, and food is one of the ways she does so, as in this scene:

“Mrs. Hess?” Angela is standing in the doorway, drying her hands on her apron. “I got the message about Ever, coming back. Shall I fix something for dinner she’ll like? Greek, maybe? I have some grape leaves. Maybe some dolmas would be nice. She loves my dolmas. If it’s something she likes, maybe she’ll eat.”
Marilyn takes another slow, punitive sip as she considers Angela’s words. Then she sets down the cursed cup, knowing Angela will clear it away for her. She stands, smoothing the invisible wrinkles from her dark, form-fitting dress, and shakes her head, as if making a regrettable but necessary decision.
“I’ve been craving salad nicoise. Make that for tonight.”
“Salad nicoise?”
“Salad nicoise,” Marilyn says firmly.
Both women know how much Ever despises salad nicoise. Selecting it for dinner is an easy way to rile the girl, to make Marilyn’s anger evident, right on the plate. Ever will refuse to eat, giving Marilyn an excuse to chastise her, and the endless cold war will continue.
“If that’s what you want,” Angela says carefully.
“It is,” Marilyn snaps. “And this coffee is terrible.”


Even in a world of advanced technology and big ideas, details matter. Food can still unite or divide us, depending on what we have and how we choose to share or deny it. For more dystopian drama – and food feuds – check out Original Syn, now available wherever books are sold.

Thanks for stopping by to share your food for thought, Beth! 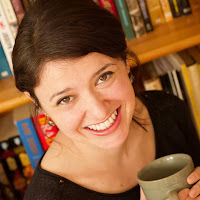 You can visit Beth here:

Posted by Shelley Workinger at 12:27 PM