FOODFIC: Please Welcome Vincent Zandri, Author of The Sins of the Sons 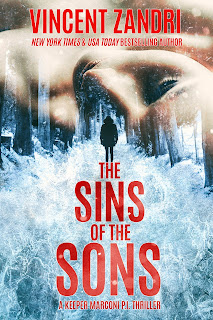 Hell Knoweth No Fury like a Hungry Gumshoe
Vincent Zandri

Jack “Keeper” Marconi, PI, is a tough man. He’s a gumshoe’s gumshoe who says what he means and means what he says, and he’s willing to back it all up with his fists if necessary. He is also a man who loves to eat and drink what he wants, when he wants. After all, his daily running/weight lifting regimen with his sidekick Blood, a 6’4” African American chunk of ebony granite, burns enough calories to keep him in tip top shape, even if he will never see 50 again.

When a potential client walks into Keeper’s downtown Albany, second floor Sherman Street office, he or she might find the muscular private eye feasting on an Italian submarine constructed of fresh ham, salami, provolone cheese, lettuce, tomato and onion slices, plus black olives, green peppers, all stuffed tightly inside a full loaf of freshly baked Italian bread. While washing this feast down with a cold Pilsner beer is always an option, Keeper is known to enjoy it with a glass of blood red Chianti, or even a double shot of Jameson Irish Whiskey, neat.

But allow me to back up a bit, to earlier in the detective’s day. As soon as the morning workout is finished, it is often customary for Keeper and Blood to hit up the local Dunkin' Donuts for two large coffees (no sugar, just milk for Keeper; black, no sugar for Blood), and a bag of half a dozen assorted donuts. Now, before you automatically do the “Cops and donuts” thing, remember, Keeper is a private dick and so is Blood. In fact, Keeper wasn’t even a real cop in a previous life. He was a prison warden and Blood was his inmate. Their relationship is a solid one. Brotherly almost. They can think one another’s thoughts. So when Blood opens the bag and spots a Blueberry Cake donut, he automatically hands it to Keeper. In keeping with the brother-from-another-mother mantra, if Keeper opens the bag and spots a chocolate frosted, he immediately hands it off to Blood. Such is the selfless nature of their crime stopping and hunger feeding relationship.

At the end of a long day of snooping and detecting, the likes of which you will find in the newly released Keeper Marconi novel, Sins of the Sons, Keeper and Blood will likely hit up a local watering hole called, Lanies Bar (which you will find in North Albany, off Albany Shaker Road…look it up. Terrific wings and steaks). Blood doesn’t have to ask for his dirty vodka martini from one of the bartenders. He or she will drop what they are doing to start on a shaker of them as soon as they see the big man approaching the glass entrance. Keeper, on the other hand, will drink a frosty domestic beer and maybe a Jameson back. Lately, he’s been enjoying the new IPA Jameson for its bite, which seems to remove much of the chill from his bones in mid-winter. Keeper will also order one of the amazing homemade soups Lanies prepares such as the Tuscan chicken with its red sauce, white beans, chunks of white chicken meat, and kale. Or a New England clam chowder so thick you can stand a spoon inside it. And he’s been tempted in the past to trade in his .45 sidearm for a bowl of the chicken and rice.

Come dinner time, when Blood and Keeper have parted, the former warden will retire to the first floor of his Sherman Street building, pour another couple of fingers of Irish whiskey, open another cold beer, and put a pot of cold tap water on the gas stove to boil. While the water heats, he’ll spin a Blue Note jazz record on the old turn table, curse himself for having sold his vintage Roger’s drum kit for some badly needed cash, and set his sights on preparing one of his famous pasta dishes. While he’s fully capable of stirring up a mean bolognese of fresh ground beef, salt and peppered to taste, and prepared in a sizzling skillet along with a full clove of garlic, chopped onion, and imported olive oil (if it ain’t nuclear green it’s not fresh enough for Keeper), he might choose instead to prepare a linguini with white clam sauce and fresh Maine quahogs. Sometimes, he’s satisfied with a spaghetti pomodoro, but only if he has fresh tomatoes, basil, and grated Romano cheese lying around. For starters he’ll prepare a fresh garden salad of iceberg, onions, black olives, and tomatoes, drowned in a simple dressing of olive oil and red wine vinegar just like his mother and grandmother used to prepare. Desert will be one last whiskey or perhaps a glass of Chianti.

It’s not easy cooking for one’s self, the lonely private eye often finds himself thinking. But then, eating and drinking as well as possible is as much a part of his life as hunting down the bad guys. And God knows, hell knoweth no fury like a hungry gumshoe.

Thanks for stopping by and sharing your food for thought, Vincent! 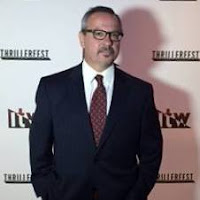 You can find Vincent here:


Vincent Zandri is the New York Times and USA Today Bestselling ITW Thriller Award and PWA Shamus Award winning author of more than forty novels and novellas. His Keeper Marconi series has sold more than 300,000 copies by three different publishers. Sins of the Sons, the newest novel in the series, is released on February 8, 2018.

Posted by Shelley Workinger at 6:57 AM