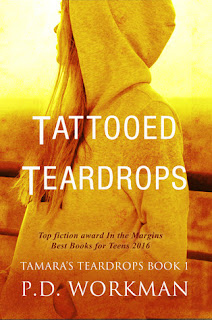 When Shelley invited me to guest post on her blog about Tattooed Teardrops, I told her that the book didn’t really mention much about food, and perhaps one of my other books would be a better choice. On sitting down and reviewing it, however, I identified a total of 23 scenes in which the characters were eating. No, not very many mentions of food at all…

Although some of the later scenes may be a little more unusual (such as a public fight in a mall food court, the armed robbery of a convenience store for munchies, or feeding a portion of a cranberry-orange muffin to a kidnapped dog,) I wanted to pick an early scene to introduce the book to you.

Tamara has just been released on parole after being in juvenile detention for three years. The transition is not an easy one, and she finds meals with her new foster family particularly stressful. She’s lived a very regimented life for the past three years, eating in the juvie cafeteria at strictly appointed times with rigid rules of behaviour, and family meals are a big change. In this scene, she has just been introduced to the rest of the members of her foster family, including her foster father, at her first dinner in the home. There are seven people around the table. Most of the dishes are not identified, other than a casserole, but Tamara doesn’t have much of an appetite.

Tamara nodded, looking down at her empty plate. Her stomach tightened and it was suddenly hard to breathe. The only men that she had been around for three years had been guards, doctors, and administrators. The last man she had lived with before that… her foster father, Mr. Baker… that had been a bad scene. A very bad scene. Tamara swallowed. She tried to slow her breathing, but it just made her breath louder in her own ears. She was sure everyone would be hear how loudly and quickly she was breathing.

And later in the scene:

She watched everyone else chow down, and conversations flowed back away from her again. Tamara watched for the appropriate time to leave the table. There was no end-of-dinner bell anymore. She had to relearn all the social graces. How to judge the end of a conversation. When one could politely leave the dinner table. How long she could look at someone before they decided she was being too aggressive. It was like living in a foreign country.

There are a surprising number of food scenes to follow. Kraft Dinner and Kool-Aid at Sybil’s house. Burgers and fries at the mall. A non-alcoholic grape juice that is not what it appears to be. And of course, General Tso chicken and an orange cranberry muffin shared with the dog. Tamara’s reintegration into society doesn’t go at all the way she had expected.

Thanks for stopping by to share your food for thought, Pam! 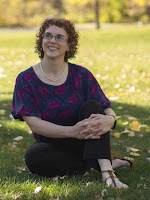 You can find Pam here:

Winner of Top Fiction Award, In the Margins Committee, 2016

“I don’t plan on getting in any trouble.”
Tamara had thought that when she got out of juvie, things would be easier. But before long, it seems like her life is spiraling into chaos.
If she can’t prove to her probation officer that she is innocent of the allegations against her, she’s going back to prison, and Tamara just can’t let that happen.

Posted by Shelley Workinger at 12:41 PM