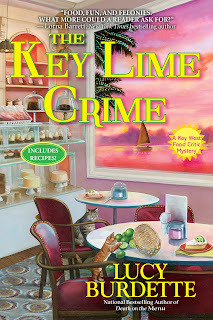 Long before I imagined I’d write a foodie mystery, I fell in love with Diane Mott Davidson’s series featuring caterer Goldie Schultz. Davidson didn't just dump descriptions onto her pages, food was part of her story. And I always finished a book wishing I could have been friends with caterer Goldy, sitting in her kitchen, tasting her food. Ten years ago I was delighted to follow in Davidson’s footsteps, signing a contract for a series of mysteries set in Key West featuring novice food critic Hayley Snow. It’s hard to believe the 11th book, The Key Lime Crime, will be published in August by Crooked Lane Books!

At one point, Hayley’s boss at the magazine she works for says this about a piece she’s writing: We’re eager to see how you’ll spin it so it’s not just a list of sandwiches and their ingredients.  And that makes Hayley worry: Did that mean he found my last round-up article lacking?

This of course is the challenge of every food writer whether writing fiction or nonfiction—how to write about the food but also make the piece about something bigger.  I try to make sure that food in my mysteries reveals something deeper about the characters who are eating or discussing it. (At the end I include recipes because it seems only fair to provide them after readers have salivated for pages and pages!) Here’s a little snippet from The Key Lime Crime to wet your whistle. Hayley’s recently married to police detective Nathan Bransford and her brand new mother-in-law is arriving in Key West unexpectedly. Hayley’s worried about hosting her properly:

Once we got past the initial awkward hellos, the evening should go by quickly. Nathan reported that Mrs. Bransford wanted to see the Christmas lights of Key West. So he had made a reservation for three of us on the last conch train that would ferry guests around the island to see the holiday displays. We’d have a cocktail and snacks at my mother’s place, then drive over to New Town to catch the train at the high school. Nathan was pretty sure he could meet us back at the houseboat for a light supper. Miss Gloria would attend all of the festivities, including the train ride, and mom, Sam, and Nathan, would join us for dinner.
“What does she like to eat?” I’d asked him. “Even more important, what does she not like?”
“She’ll like anything you make,” he said. “Food isn’t that important to her.”
Which meant we were starting out light-years apart. Not only was I the food critic for Key Zest, I came from a long line of foodies whose life-long obsession was the next great meal. Food was love—that was our language. Obviously, she spoke some other dialect altogether.

Thanks for stopping by to share your food for thought, Lucy! 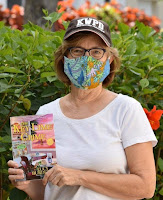 You can find Lucy here:

Clinical psychologist Lucy Burdette (aka Roberta Isleib) is the author of 18 mysteries, including THE KEY LIME CRIME (Crooked Lane Books,) the latest in the Key West series featuring food critic Hayley Snow. Her books and stories have been short-listed for Agatha, Anthony, and Macavity awards. She's a past president of Sisters in Crime and the current president of the Friends of the Key West Library.


About The Key Lime Crime:

With her intimidating new mother-in-law bearing down on the island and a fierce rivalry between Key lime pie bakers to referee, food critic Hayley Snow is feeling anything but festive…

It’s the week between Christmas and New Year’s and Key West is bursting at the seams with holiday events and hordes of tourists. Adding to the chaos, Key lime pie aficionado David Sloan has persuaded the city to host his Key Lime pie extravaganza and contest. Hayley Snow can’t escape the madness because her bosses at Key Zest magazine have assigned her to cover the event. Every pie purveyor in Key West is determined to claim the Key lime spotlight—and win the coveted Key Lime Key to the City.

Another recipe for disaster—Hayley’s hubby, police detective Nathan Bransford, announces that his mother will be making a surprise visit. Newlywed Hayley must play the dutiful daughter-in-law, so she and her pal Miss Gloria offer to escort his mom on the iconic Conch Train Tour of the island's holiday lights. But it's not all glittering palm trees and fantastic flamingos--the unlikely trio finds a real body stashed in one of the elaborate displays. And the victim is no stranger: Hayley recognizes the controversial new pastry chef from Au Citron Vert, a frontrunner in Sloan’s contest.

Hayley must not only decipher who’s removed the chef from the contest kitchen, she's also got to handle a too-curious mother-in-law who seems to be cooking up trouble of her own.

“The well-described Key West setting nicely complements the foodie frame in this satisfying cozy, which is a natural for fans of Joanne Fluke’s Hannah Swensen mysteries.”
—Booklist

Posted by Shelley Workinger at 11:20 PM