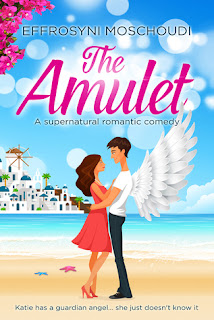 I was born and raised in Athens, but my parents hail from two different Greek islands. My father, from Limnos in the Northeast Aegean, and my mother, from Corfu in the Ionian Sea. As a child, I often spent my summers on these islands, Corfu mostly, and have a plethora of fond memories from big family get-togethers when my mother and my Corfiot grandmother delighted everyone with their cooking. Other times, we’d enjoy Greek food at seaside tavernas and, instead of dessert, we’d all treat ourselves to some Syrtaki dancing for afters!

When it came to writing novels, naturally, I wound up setting them all at the seaside, in tiny villages such as the ones I’ve known all my life firsthand. And I filled my stories with references to delicious Greek meals that are typically enjoyed in quaint tavernas on the shore.

The Amulet is no exception, and, actually, I may have overdone it in that one! The heroine, Katie, leaves a stressful office job in Athens to start a new life at a much slower pace on the island of Sifnos, in the postcard-perfect Cyclades, working as a receptionist in a small family hotel on the beach.

The hotel cook, a middle-aged lady called Eva, often makes Katie feel ravenous at reception, seeing that heavenly smells of cooked food tend to waft to her desk from the kitchen, where Eva is forever busy creating one culinary triumph after another. Eva and Katie enjoy their meals together in the kitchen while, more often than not, discussing Aggelos, the quirky young man who’s stolen Katie’s heart, and who, unbeknownst to her, is not a man per se… but a guardian angel.

But that’s another story… So, anyway, the owner of the hotel, Mr Spyros, often comes in to chat with the two women while taking the opportunity to sample Eva’s cooking, like cheese-filled biftekis, spinach pies in phyllo pastry, and freshly baked muffins. The latter he has to gobble up pretty quickly, seeing that his wife, the rather bossy Mrs Matina, watches him hawk-eyed, as he is supposed to be on a diet. Again.

But, the most appreciative of Eva’s cooking turns out to be a mysterious little girl called Chloe… Her first encounter with Eva and Katie is rather awkward – seeing that she’d sneaked into the kitchen when no one was in, and they caught her eating from Eva’s newly baked moussaka. In her defense, she was very hungry… Plus, it was her favorite meal in the whole wide world…

Thanks for stopping by and sharing your food for thought, Effrosyni! 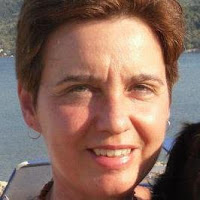 You can find Effrosyni here:

Effrosyni Moschoudi was born and raised in Athens, Greece. As a child, she loved to sit alone in her garden scribbling rhymes about flowers, butterflies and ants. Today, she writes books for the romantic at heart. She lives in a quaint seaside town near Athens with a British husband, two naughty cats, and a staggering amount of books and DVDs. Her little town is heavenly enough, yet her mind forever drifts to her beloved island of Corfu.

The Ebb, her new adult romance that was inspired from her summers in Corfu in the 1980s, is an ABNA Q-Finalist. Her debut novel, The Necklace of Goddess Athena, won a silver medal in the 2017 book awards of Readers’ Favorite. Her ghost romance novella, The Boy on the Bridge, was a Top 10 winner in the “50 Best Indie Books” awards of Readfree.ly in 2021.

What others say about Effrosyni’s books:

“Effrosyni layers her words on the page like music.”
~Jackie Weger, author of The House on Persimmon Road

“Very few writers have such a gift for realism.”
~Kelly Smith Reviews

Go here to grab FREE books by this author: http://effrosyniwrites.com/free-stuff/

Posted by Shelley Workinger at 10:09 AM