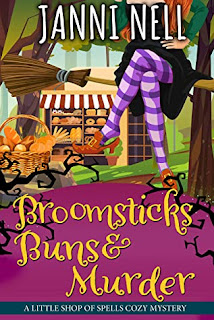 I love using food to help readers get to know my characters better. When I decided to set the opening scene of Broomsticks, Buns & Murder in a restaurant, I knew the food choices of the three dinner companions would be important. Each food choice had to match the character’s personality. With this in mind, I studied a lot of menus before I made my final choices. Since I write mysteries, I thought it would be fun to make this post a mini-mystery. So, here goes. The three meals I finally settled on were seafood pasta, Alaskan halibut with salad and Wagyu beef.

Based on the following character descriptions, can you guess which character ordered which meal? (Answers below.*)

He’s the self-indulgent owner of a chain of bakeries with an ego bigger than his waistline. He enjoys nothing better than buying other people’s successful bakeries to add to his chain. It doesn’t bother him if he has to pressure the owners to sell.

Actually, she’s the mayor’s second—some might call her a trophy—wife. Devoted to her husband, she takes the duties of a mayor’s wife very seriously especially when it comes to her appearance. She loves designer clothes and is never seen without perfect makeup and hair. Her hobby is adding to her collection of diamond jewelry.

She runs a shop in town that sells potions and spells. At twenty-nine years old, she has discovered a talent for solving mysteries. Although she hasn’t gotten around to marriage, she does have a cute boyfriend. She enjoys food and has never met a carb she didn’t love.

It was fun researching menus for this scene and I spent a lot of time thinking about the kind of meal I’d order. It would definitely be some kind of seafood—probably lobster—followed by a dessert featuring chocolate. If you were treated to a meal in an upmarket restaurant, what would you choose?

Thanks for stopping by to share your food for thought, Janni!

You can find Janni here:

Janni Nell is the author of the Little Shop of Spells cozy mystery series. Before she became a writer, she worked as a personal assistant, receptionist and salesclerk. Now she is happy to spend every day creating stories. When she isn’t writing, you can find her at dance class, Pilates or in the garden. She is hard at work on her next book.

*If you guessed the businessman had Wagyu beef, the mayor’s wife had Alaskan halibut with salad and the witch had seafood pasta, you’re absolutely correct.

Posted by Shelley Workinger at 10:24 AM