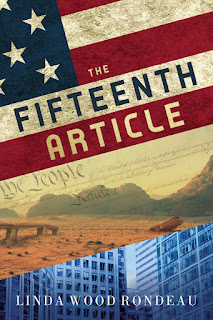 FOOD IN THE NEXT WORLD TO COME

What would people eat in a post-apocalyptic world? Something I had to consider when writing my futuristic political thriller, The Fifteenth Article. The diet in this book is dependent upon where people live. In the cities, only the rich can afford fresh meats, vegetables, and fruits. The rest of the populace subsists on cloned provisions, meager at best.

Nuclear damage to the environment due do sporadic wars, religious confrontation, global climatic upheaval, and the failure of government to fix economic and social issues, led to a second dark age. The Governments consolidate and a world government is formed called The Accord. It was too weak, much like The League of Nations, and was replaced by  quasi-democratic system called The Constitutional Government based on Fourteen Articles of Confederation. The world is divided into nineteen provinces, each with a local leadership. Each province has a domed, capital city where citizens enjoy a comfortable life if they promise allegiance to the Constitutional Government.

In the recent past, those who disagreed with the government were allowed to defect and take their chances living in the hostile regions surrounding the cities. They were left to their own systems, mostly comprised of nomads and marauders. Food was scarce and was comprised of whatever animal or vegetation survived the nuclear wars.

However, two provinces began to organize … one militarily, based in the Highlands provinces of former British Isles and Ireland. The developed agricultural system in the Western America Province, centered around what was Colorado, and near the city of America Prime … headquarters for both the Western America Province and the World Capital. Because of it’s agricultural importance, the government began a system of interference to take control of the area, beginning with tithes in exchange for autonomy. It’s food was vital to feeding millions with fresh food, rather than a dependence upon cloning.

When the book begins, the first president of The Constitutional Government, in power for twenty-five years, is dying. He has opted for euthanasia. According to law, his second becomes acting president until his position as the new president is approved by Congress. The new president has his eyes set on the agricultural success of Western America outland and hears rumor of the area declaring independence from the world government.

To counteract this growing idea, the new president has proposed a bill to make defection both present and past a crime punishable by death. However, he also proposes an option of repatriation to avoid the death penalty. The new law, or the Fifteenth Article, would become law upon his official installment as president. Will the banded communities of Western America Province outland resist or surrender their hard-won freedom? Will civil war emerge and throw the new world into a third dark age?

Throughout history, agriculture has been important to governments who continue to find ways to control the national breadbasket.  And so it is, in the next world to come.

You can find Linda here:

Something to be said for a man who likes to cook. After retirement, my husband took over the culinary reign in the Rondeau household. For the most part, I like this … gives me more time to focus on my writing career. As retired folks, we probably, ashamedly, focus on ease and convenience more than nutrition … something we’re committed to change going forward. Glad we don’t have to resort to cloned food as many in The Fifteenth Article need to do.

Retired social worker and award-winning author, Linda Wood Rondeau lives with her husband of forty-five years in Hagerstown, MD. The author is a breast cancer survivor and a recovering food addict. A Toastmaster graduate, she enjoys speaking to groups about her experiences as well as the writing life. She has published over fourteen books, including a few nonfiction works, and has served as managing editor for her publisher, Elk Lake Publishing for a number of years. Currently, she is semi-retired from this position but continues to provide editing services for the house. When not writing, she enjoys playing golf, going for hikes, shopping, and spending time with her family, as well as eating anything containing chocolate.

ABOUT THE FIFTEENTH ARTICLE

Does Chaos in United Earth Foretell a Third Dark Age?

In a post-apocalyptic era, factions compete for control of a global government gone amuck. The Network, a system of outworld communities comprised of defectors and Nomadic tribes, has become organized and desires more independence from United Earth’s dictates.

Edwin Rowlands, current governor of Western America Province and President-elect of United Earth, fears if other outworlds follow the Network’s example, the system of one government, one world, one people will collapse. His proposed Preservation Act, the Fifteenth Article of United Earth’s Constitutional Government, would criminalize non-citizenship—past, present, and future—punishable by death without benefit of trial.

As the cry for freedom crescendos, Ahmed Fared, Rowland’s Second-elect, fears a civil war that would usher in a third dark age. He calls upon the God of the Ages to once more intervene in the affairs of men.

Posted by Shelley Workinger at 9:45 AM