FOODFIC: The Art of Racing in the Rain – Garth Stein 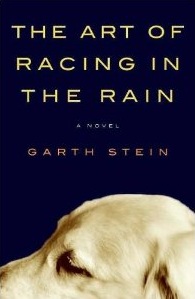 From the beginning, we know we love Denny best because Enzo does. And we learn to love Zoe and Eve as he does, too. But the grandparents – particularly Maxwell – we’re not sure about. Until – you guessed it! – we see him feed Enzo.

“Want a treat, boy?” he asked, holding out a pepperoncini.

Oh, and did I mention that Enzo is a dog?

And this is how the pepper goes down: I took the pepper from him and immediately felt a prickly sensation on my tongue. I bit down, and a burning filled my mouth. I quickly swallowed and thought I was done with the discomfort…but that’s when the pain really began. My throat felt as if it had been scraped raw.

I could go on about how the pepper also felt coming out, but I won’t; I’ll just share the lesson Enzo learned: Since that time…I have never accepted food from someone I didn’t fully trust.

Since we all know that you can tell everything about a person by the way he treats animals, I can’t think of any better way Stein could’ve given insight into this character and also set the stage for the entire second half of the book. I almost feel like I should’ve written *spoiler alert* because that one pepperoncini scene tells so much!

So I think I’ll have to stop there or else I really will ruin the ending for those of you who haven’t read this book yet. And I will think of Enzo every time I pass a Papa John’s from now on :)
Posted by Shelley Workinger at 8:22 AM