FOODFIC: The Singer of All Songs - Kate Constable 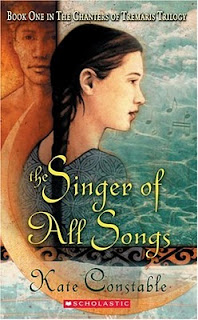 There is a saying in Penlewin that hunger is the finest sauce.

Calwyn, the 16-year-old novice ice princess, has never been truly hungry in any sense of the word. She lives in the quiet paradise of Antaris, protected from the outside by impenetrable walls of ice. She sings chantments, cares for the bees, and eats warm bread with precious honey. Her life is golden.

Until a mysterious man (aren’t they always?) crosses the wall and opens Calwyn’s eyes to new possibilities. Before she even realizes what she’s doing, she follows him out of Antaris and leaves behind the safety of honey for wild rabbits and birds they roast themselves with mountain plants for seasoning. She’s finally getting her first real taste of life, and it’s so delicious she exclaims, The air tastes like – like queen’s jelly! (Highest of accolades.)

And, of course, now that she’s drunk the elixir of freedom, there’s no going back – not even with evil sorcerers, pirates, and erupting volcanoes on the Outland menu.

I haven’t even mentioned the secondary edible icon – the apple, which plays its own symbolic role. There is expectedly an apple orchard in Antaris, and the obvious predictor of Calwyn’s exit from her homeland is Darrow’s carving of one fruit globe into a map of the world. His piercing of the apple skin serves to crumble the illusory walls of her perceived paradise and things will never be the same.

Fortunately, this is only book #1 of the Chanters Trilogy, because Constable has barely dipped her spoon into Tremaris, and we have many unchartered lands and exotic tastes to explore.
Posted by Shelley Workinger at 9:34 AM