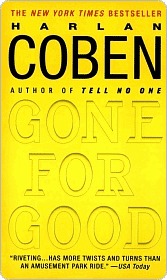 You know how sometimes you read a book (or see a movie) and something just jumps out at you? It could have nothing to do with the main characters or furthering the plot – you might even be able to cut the scene without altering the story at all – but it’s the thing you’ll always think of whenever you hear the title, like Davy Jones playing the organ with his tentacles in Pirates of the Caribbean 2.

Anyway, that’s what happened for me in this book. In fact, I normally wouldn’t even review it at BWATE? since it’s not YA, but the most memorable scene involved food so bizarre that I had to blog about it.

Now, pretty much everything that happens is this book is shocking and hugely improbable; Will (the MC)’s brother Ken vanished after supposedly killing Will’s girlfriend (oh, and right after he – Ken – slept with her). Although Will assumed his brother was dead, 10 years later their mother utters a dying admission that Ken is still alive. While Will tries to process that bombshell, his new girlfriend Sheila takes off in the middle of the night, only to turn up murdered in another state.

So, while looking into the 2nd girlfriend’s murder with the 1st girlfriend’s little sister, Katie (who’s 18, so maybe there’s my YA tie-in!), he discovers that the two dead girls who seemingly should’ve had no connection were actually sorority sisters in college. You guessed it - Next stop: sorority house, which is (of course) where the memorable foodstuff happens.

On campus, Will and Katie meet Mrs. Rose Baker, house mother both now and back when Sheila and Julie lived there. Sadly, her husband passed away many, many years ago, and her life now revolves around mourning. Oh, not mourning him, silly! Princess Diana is the one she holds the candle for; music-literally, actually, playing Elton John’s Diana-tribute version of “Candle in the Wind” as her guests enter. Will (and I) can’t help but be shocked by the amount of Di paraphernalia: tea sets, pillows, figurines, shot glasses, thimbles, nightlight, sunglasses – you name it, Di’s on it. The kicker is when Mrs. Baker offers them cookies in the shape of Princess Diana’s profile; sprinkles formed the crown.

I’m impressed by both her ability to think up the idea in the first place and the time/work/patience she must’ve put in to perfect her creation, but I’d most like to ask her how she feels eating the face of her dead idol! Or perhaps the edible homage is a treat only for guests and she abstains.

I just know that I may not remember if Will ever finds his brother or his girlfriend’s murderer, but I definitely won’t forget Mrs. Baker’s cookies.

Posted by Shelley Workinger at 7:50 PM