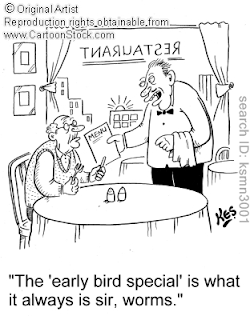 Is punctuality necessary? Pandora asked.
Yes, I answered without hesitation.

And my 2 becauses were:
1. You never want to be late for dinner; and
2. The early bird gets the worm.

Then I thought, "Ooh, let me go find a cute moving image of a bird getting a worm for my top graphic."

Which took up the rest up of my day.

First, I typed in "bird gets worm,"
then HAD to click on "frog eats giant worm,"
and then (to see more cool worm videos!) broadened my search to "eating worms,"
which turned up more than one porn site. Seriously. (And yes, I admit I was curious, but too fearful of viruses of all kinds to click on one.)
I did click on "raccoon eating worms,"
which led to "triplet baby raccoons,"
then "dog nursing raccoons,"
then "dog nursing baby deer,"
then "dog catches shark,"
then "shark vs. crocodile,"
which suddenly reminded me of this wild (literally) documentary I saw a long time ago on "big cats," which showed a jaguar dive into a river and catch a caiman.
FOR REAL.

Of course I had to go looking for THAT video and, even though I didn't find it, I did find this one:

So, long story less long, I didn't write my post on punctuality.

Now, I could try to wrap this all up with some clever connection between the early bird getting the worm (where I began) and the early jaguar getting the caiman (where I ended up), but my retinas (and brain) are a little fried from all the viewage.

Instead, I'll just say that YouTube is super fun - and addictive - BUT punctuality is so important that I was able to tear myself away (as soon as I finished "bee vs. jumping spider") to make it to my friend's birthday party ON TIME ;)
Posted by Shelley Workinger at 7:11 PM